Couple Travels To Ukraine To Save Family, Help War Effort 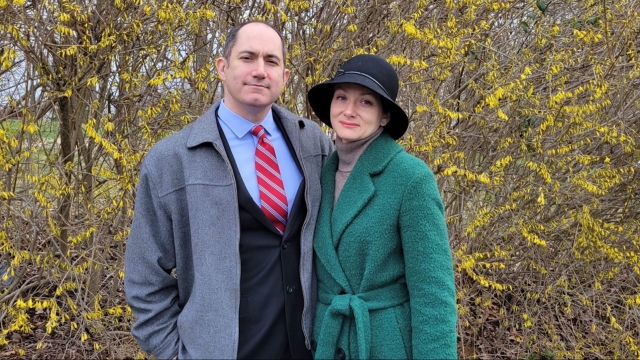 "The trip, like most things in war, was impossible to plan," Bonenberger said.

Solomko's parents were still in Ukraine in their 70s with health problems and in a high rise building in Kyiv, a city Russian forces were attacking.

"We were not able to convince them to leave Kyiv," Solomko said.

They had tried to get them out before Russia invaded. But after the war began, the elevator broke down in her parents' building. Realizing how dangerous it would be to stay on the 14th floor, they walked away, step by step, down the stairs.

That's when Bonenberger and Solomko booked their trip. The plan was for Solomko's brother, in Kyiv, to drive their parents to the Western city of Lviv.

But as they waited, they decided to help Ukraine's war effort: Solomko coordinated deliveries of food and medicine to a priest in Kyiv. And Bonenberger used his counterinsurgency background from the war in Afghanistan to train a local defense force of volunteers in Ukraine.

"Somebody, a collector, brought a bunch of World War II and Soviet era weapons out so people had something to hold," Bonenberger said. "But, you know, at the end of the training, we got 500 bullets to distribute between 50 of them. And we had like a small shooting range, so everyone got to shoot 10 bullets at a target just to feel what it would be like to fire a weapon."

They trained in below freezing conditions in a secret location.

"I can't tell you exactly where it was for reasons of operational security," Bonenberger said.

For two weeks, the group focused on basic urban defense and small unit tactics — how to move, take cover, and minimize risks.  "In the minds of the people who showed up for the training, they were ready to fight with no training. They were going to fight," Bonenberger continued.

They were still waiting for Solomko's parents to escape when the Russians hit an aircraft repair facility in Lviv.

"Every day, it was air raids. And it was in the night, it was during the day. And yeah, we didn't feel safe," Solomko said.

"The most touching moment was for me when I was finally able to hug my mom," Solomko continued.

There were logistical challenges — a 36-hour drive and a night spent sleeping in an abandoned school dormitory.

Dmytro Solomko, a retired Colonel in the Security Service of Ukraine, and his wife Nina say they wished they could have fought with a civilian defense force.

"I was thinking until the last minute, 'I should stay and help. If only I were healthier and younger to protect Kyiv,'" Dmytro said.

Now in the United States, everyone is relieved, but tired. And the days are still hard.

"It's silent here," Nina said. "There's peace and I'm still getting used to it. When I hear a plane in the sky, it feels like a threat after what happened in Kyiv."

They think about the neighbors they left behind, the walks they used to take along the Dnipro river.

In Connecticut, they plan to learn English and savor time with family. But they're hoping they can use their round-trip plane tickets back to Ukraine.