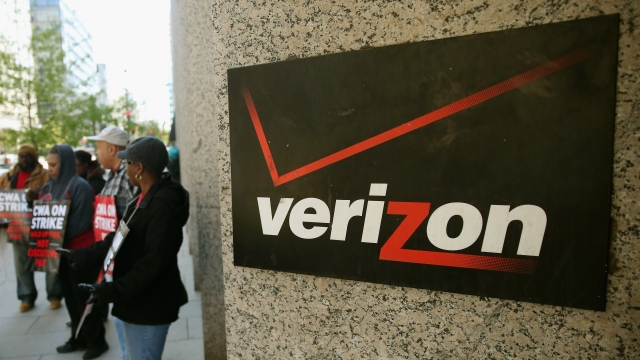 SMS
Verizon Workers Score Major Wins With The Deal To End Their Strike
By Grant Suneson
By Grant Suneson
May 30, 2016
After almost seven weeks, a union representing Verizon workers agreed in principle on a contract. Verizon made several major concessions in the deal.
SHOW TRANSCRIPT

Nearly 40,000 striking Verizon employees will return to work Wednesday after coming to terms on a new contract.

Labor union Communications Workers of America and Verizon reached an agreement Friday, and it looks like a big win for the workers.

Terms include $1,250 in bonuses and annual raises for the next four years, as well as some profit sharing from the company. Verizon will also add 1,300 unionized call center jobs on the East Coast, even though it wanted to shut down call centers in the U.S. to move them overseas.

Verizon abandoned proposed pension cuts and changes to its illness and disability policy. But it wasn't all bad news for Verizon. Union members will take on more health care costs, saving the company millions.

The nearly seven-week strike became so contentious that Labor Secretary Thomas Perez had to help mediate, and the end couldn’t have come soon enough for Verizon. The labor stoppage reportedly made it hard for Verizon to install services for new customers.

The agreement still needs to be ratified by the union, which is expected to happen in the next two to three weeks. If ratified, the contract will be good until August 2019.

This video includes clips from WTVR and Communications Workers of America and images from Getty Images.