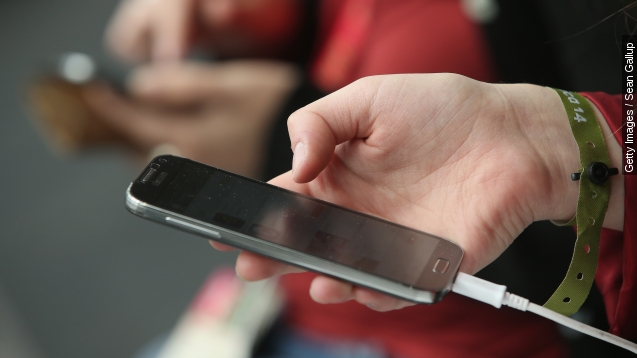 Verizon and Sprint, you have officially been called out and punished for something the Federal Communication Commission's been warning customers about for years.

"They wonder why their telephone bill is up a dollar or two. They look at their bill; they can't necessarily figure it out," said Lynn Ratnavale of the Consumer and Governmental Affairs Bureau. (Video via Federal Communications Commission)

Verizon is now on the hook for $90 million in fines, with federal regulators fining Sprint $68 million. Most of that money will go back to consumers. So what are we talking about here?

Cramming, as the FCC and the Consumer Financial Protection Bureau call it, is when wireless providers allow third parties to throw unauthorized text messaging charges on your phone bill. (Video via Federal Communications Commission)

Other providers like AT&T and T-Mobile have already been fined for the same practice.

So federal regulators say the company that advertises it can cut your bill in half and the other company that brags about legendary reliability turned a blind eye to charges that typically cost consumers $120 a year. (Video via Sprint and Verizon)

Regulators say the monthly charges ranged from 99 cents to $14, but most were about $10. All these text messaging services typically needed to bill you was your cellphone number.

Of that $10-a-month charge, the feds say Verizon typically took a $3 cut, with Sprint keeping $3.50. The companies also either refused refunds or only partially refunded customers.

Both companies released statements saying they cut off cramming practices before the government investigations began.

If you're a Verizon or Sprint customer, you can submit refund claims at CFPBSettlementVerizon.com or SprintRefundPSMS.com.

The FCC says Tuesday's settlements brought the cramming fines against the U.S.' four largest wireless carriers to a total of $353 million.