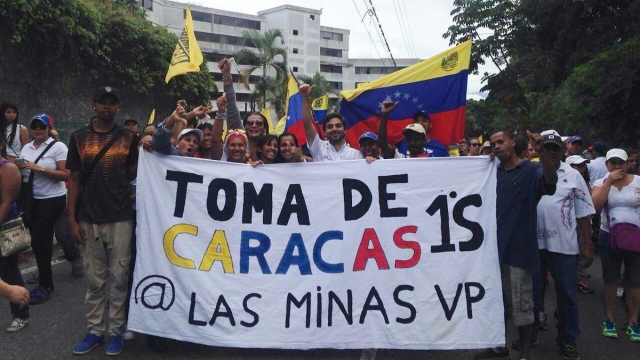 SEE MORE: Venezuela's Political Crisis Is Devolving Into A Humanitarian One

Thousands protested in the streets of the capital, "la gran toma de Caracas" or "the great takeover of Caracas" on Thursday. Opposition leaders spent weeks traveling the country promoting a peaceful march.

At one point, government officials shut down metro stations and were blocking buses packed with people from entering tunnels into the city.

This is the latest attempt to remove Maduro from office, but it's just one part of a greater effort.

The opposition party is in stage two of a recall referendum process. It needs to collect about 4 million signatures to start the recall.

Meanwhile, the Chavista government can’t block the referendum, but it can stall it. Officials have filed around 9,000 lawsuits across the country for signature fraud to thwart the opposition group's efforts.

If the delay succeeds, then the referendum will be held after Jan. 10 of next year, and Vice President Aristóbulo Isturiz becomes president, which would preserve Chavista power. If the referendum is held this year, there will be a new presidential election, and the opposition has a chance to take office.

"There is no legal or technical reason why the recall referendum can't take place this year. When [Hugo] Chavez wanted a recall referendum, it happened in four months," said Henrique Capriles, governor of Miranda and opposition leader.

Maduro says the government will fight for peace in Venezuela and accuses the opposition of inciting violence.

"I have given very clear instructions to the bodies of state security to secure the principal cities of the country. And whoever goes out and tries to incite violence without permission to mobilize will be detained," Maduro warned.

But Venezuelans are starving. They face a recession that has caused hyperinflation, looting and food shortages.

"Look at how fat I was. Look at how many holes I made to this belt. Maduro's diet," a man told a VICE reporter.

"I am 77 years old, and this is the first time that people are hungry, and they won't admit it because they are Chavistas," Rogelia de Pino said while waiting for food.