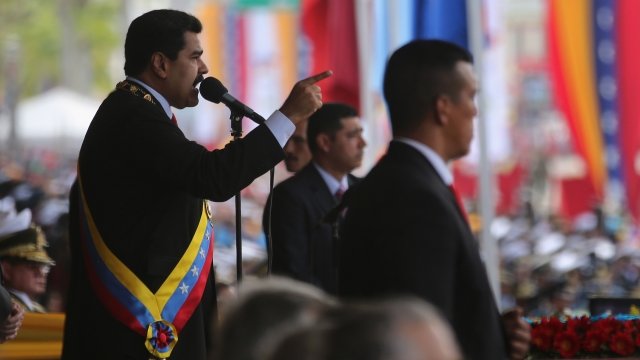 SMS
6 Detained In Venezuela Over Alleged Maduro Assassination Attempt
By Katie Cammarata
By Katie Cammarata
August 5, 2018
The Venezuelan government says Nicolas Maduro was speaking at a military parade when drones armed with explosive devices flew toward the stage.
SHOW TRANSCRIPT

Venezuela's government says six people have been detained in relation to an apparent assassination attempt on the country's president Saturday.

Reuters reports that one of the six had a pending warrant in connection with an attack on a military base last year, and another was arrested in 2014 for taking part in anti-government street protests.

The Venezuelan government says President Nicolas Maduro was speaking at a military parade on Saturday when drones armed with explosive devices flew toward the stage and detonated.

Footage of the event shows Maduro and his wife suddenly looking up and wincing after what appears to be an explosion. Bodyguards quickly surrounded Maduro.

A Colombian official told CNN that Maduro's claims were "baseless." According to multiple outlets, the Venezuelan government often accuses opposition parties and Colombia of plotting attacks.

But first responders at the scene didn't agree with what the Venezuelan government said happened. They told The Associated Press there was a gas tank explosion in an apartment near where Maduro was speaking, but they didn't tell the AP how they came to that conclusion.

Maduro has called for "maximum punishment" after the incident.