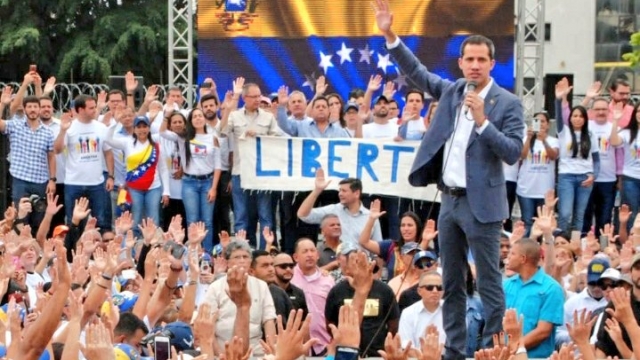 Opposition leader Juan Guaidó has been attempting to pressure Venezuelan President Nicolás Maduro to step down.

Here's some context: On Tuesday, Guaidó posted a video of himself standing in the street surrounded by military members. In a series of tweets, Guaidó said the "people of Venezuela initiated the end of the usurpation."

He also called on Venezuelans to "go out together on the street, to support the democratic forces and to recover our freedom." In the tweets, Guaidó said he was meeting with the National Armed Forces and that it has "taken the right decision."

Venezuela's defense minister rejected the so-called coup in a statement Tuesday, saying the National Armed Forces "stands firm in defense of the National Constitution and its legitimate authorities."

There were clashes between protesters and law enforcement after Guaidó's call to action. The New York Times reports tear gas canisters were detonated near a military base in Caracas, and protesters were marching toward an air base there with Venezuelan flags.

In a televised address late Tuesday, Maduro said Venezuela has "been facing various forms of coup d'etat, due to the obsessive efforts of the Venezuelan right, the Colombian oligarchy and the U.S. empire."

It appears the so-called coup hasn't been defeated, though. Guaidó tweeted Wednesday morning that the Venezuelan people would continue "Operation Liberty."