US Oil Sanctions On Venezuela Could Cut Both Ways 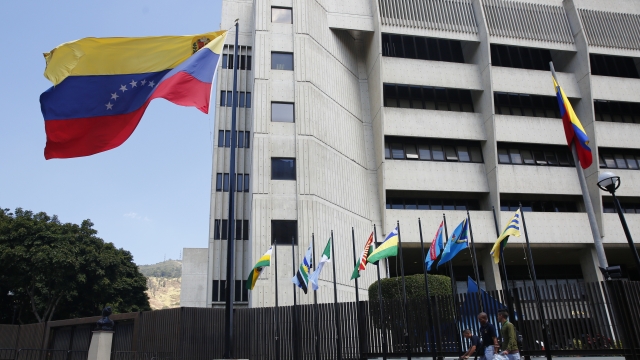 SMS
US Oil Sanctions On Venezuela Could Cut Both Ways
By Matt Picht
By Matt Picht
January 29, 2019
New U.S. sanctions on Venezuela will cause severe economic pain in the country, and could also hit U.S. oil companies as well.
SHOW TRANSCRIPT

The new U.S. sanctions on Venezuela's state-run oil company are designed to severely cut into the country's already weak economy. But the move is likely to create economic discomfort here in the U.S. as well.

According to the U.S. Energy Information Administration, the U.S. imported just over 179 million barrels of Venezuelan crude oil and petroleum products from January to October last year. That's about 5 percent of the total U.S. imports over the same time period.

U.S. reliance on Venezuelan oil has declined in recent years, but the country is still among the largest crude oil suppliers to the U.S. Finding a way to replace Venezuela's crude oil exports could be costly for U.S. refineries — it's not clear whether consumers will end up feeling those costs at the pump.

Treasury Secretary Steven Mnuchin suggested the U.S. might turn to the Middle East to make up any shortfalls from Venezuela. The Treasury is also offering certain companies licenses to wind down operations with Venezuela over the next few months.

Venezuelan President Nicolas Maduro relies heavily on oil funds: 70 percent of the government's income comes from the oil industry. Exports to the U.S. are a key part of that trade, making up 41 percent of the country's total exports.

The goal of these sanctions is to force Maduro to surrender power to Juan Guaidó, the opposition leader who's declared himself president in a bid to challenge Maduro's legitimacy. The U.S. is attempting to funnel Venezuela's government assets to Guaidó in order to cement his claim to Venezuela's presidency.