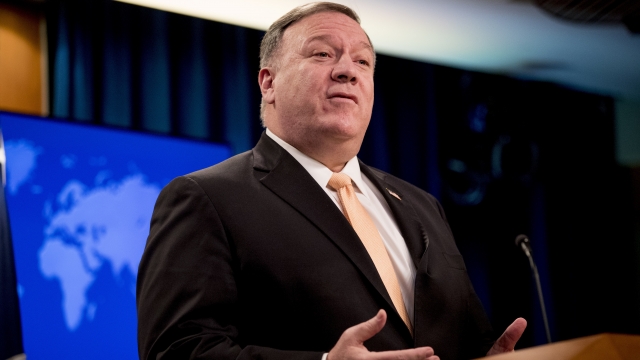 SMS
Venezuela Rejects Terms Of U.S. Offer To Lift Sanctions
By LeeAnne Lowry
By LeeAnne Lowry
April 1, 2020
The country said it "doesn't and will never accept the tutelage of any foreign government."
SHOW TRANSCRIPT

Venezuela has rejected the terms of a U.S. offer that would have resulted in lifted sanctions. Secretary of State Mike Pompeo made the offer on Tuesday.

Pompeo announced, "Broadly speaking, it would put the elected members of National Assembly representing both sides, would create an acceptable council state to serve as the transitional government until presidential and National Assembly elections could be held, we hope within six to 12 months."

Pompeo touted the plan as "a clear, equitable, and common sense path to end the political crisis in Venezuela." His offer reflects suggestions from opposition leader Juan Guaidó, whom the U.S. recognizes as the country's rightful president.

Pompeo told reporters, "We all, Juan Guaidó and his entire team, understand that Nicolás Maduro must go."

But the country's foreign minister replied, "The Bolivarian government reiterates that Venezuela doesn't and will never accept the tutelage of any foreign government."