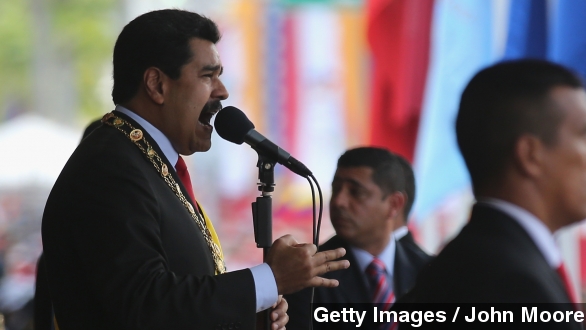 In Venezuela, it looks like anti-American rhetoric has finally resulted in action.

On Saturday, President Nicolas Maduro announced sweeping diplomatic sanctions against the U.S., including reducing the U.S. embassy's staff from 100 to close to 20 and banning some politicians. (Video via TeleSur)

That's in addition to detaining an unknown number of American citizens on suspicion of espionage, a part of what Maduro says is a conspiracy to overthrow the government.

These kinds of allegations from Maduro have been common, with the Venezuelan president deflecting accusations of human rights abuses in his own country with accusations of his own. (Video via Government of Venezuela)

In a speech last week, Maduro even cited Oscar winner John Legend's acceptance speech, in which he said more black men are imprisoned today than were enslaved.

As U.S. Secretary of State John Kerry said during testimony before the Senate Foreign Relations Committee, those alleged abuses include imprisoning opposition figures on trumped up charges. (Video via C-SPAN)

Although the diplomatic sanctions are new, Maduro's accusations against the U.S. follow in his predecessor and mentor Hugo Chavez's footsteps.

Foreign Policy writes, "During his 14 years in office, Chávez 'discovered' 19 assassination plots that, oddly enough, often coincided with when his regime was beset by economic and political problems."

Still, it's not clear how effective this tactic is. A local pollster told Venezuelan network Globovision only 20 percent of people believe Maduro's claims.

If that sentiment holds up in the coming months, it could hurt the president, with congressional elections scheduled for December.