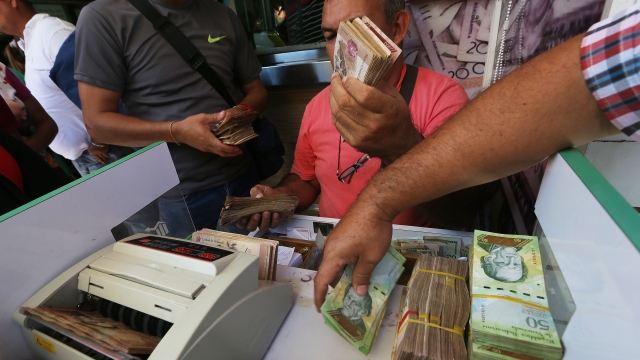 SMS
To Counter The 'Mafia,' Venezuela's Ditching Its Highest-Value Bill
By Ryan Biek
By Ryan Biek
December 12, 2016
Citizens will have 10 days to exchange their 100-bolivar notes for coins and other bills.
SHOW TRANSCRIPT

In its "economic war" against gangs, Venezuela is now scrapping its highest-value cash bill.

People will have 10 days, starting Wednesday, to exchange their 100-bolivar notes for coins and other bills.

Venezuela's president Nicolás Maduro has blamed much of the country's economic woes on international gangs, which he says are hoarding 100-bolivar notes. But soon those bills will be worthless.

The gangs use the cash to buy up subsidized goods that are incredibly scarce in Venezuela, and then sell them for huge profits in Colombia.

Critics say Maduro's move will hurt ordinary citizens too, saying 10 days isn't enough time for people to exchange all of their 100-bolivar notes.

This story likely sounds familiar. Last month, India made a similar move, eliminating its two largest bills to fight corruption. As a result, people spent hours in line at ATMs and banks ran out of money.

In an attempt to combat the country's inflation crisis, Venezuela previously announced plans to introduce six new higher-value bills, ranging from 500 to 20,000-bolivars.

If the gangs can get their hands on those, they'd have an even more mobile and valuable asset.