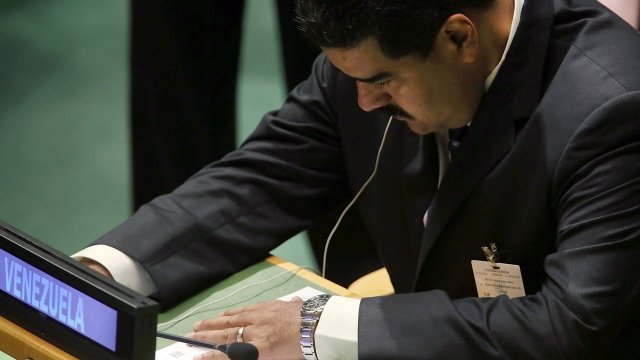 The South American country has roughly $140 billion in outstanding debt.

Venezuela is broke. The country recently defaulted on its massive debt and is working with creditors to restructure its billions of dollars in foreign loans and bonds.

In total, Venezuela owes roughly $140 billion. Compare that to the country's central bank holding an estimated $10 billion, up to half of which is speculated to be in illiquid assets like gold.

By one estimate, inflation has skyrocketed to more than 4,000 percent compared to this time last year.

The Trump administration wants Americans to support privately owned businesses and the Cuban people — not the Cuban government.

Venezuelan President Nicolás Maduro argues American "imperialists" are to blame – the U.S. recently labeled Maduro a dictator and imposed sanctions on the country. But experts seem to agree that years of mismanaged socialism and falling oil prices are the real culprits.

Maduro is in the process of restructuring some of the country's debt. But as more bills come due, it's possible Venezuela's debtors will start seizing the country's oil assets outside its borders.

Even with diminished value and production, oil is still Venezuela's top export, accounting for 95 percent of its foreign earnings.

A recent anti-corruption purge at the company led to the arrest of several U.S. citizens.