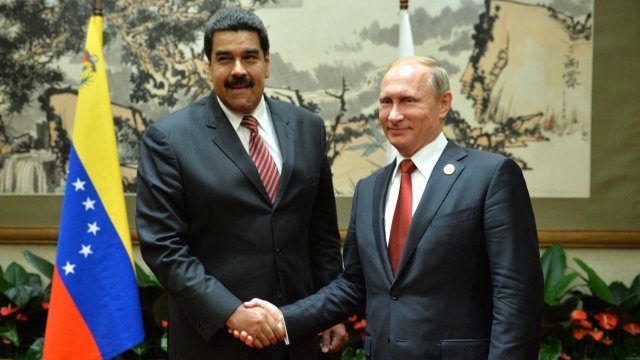 Russia's investment in Venezuela largely revolves around the country's massive oil fields. Russian companies own major stakes in oil projects all across Venezuela, accounting for 3 million of the 8 million tons of oil Venezuela pumped from those projects in 2017.

Opposition leader Juan Guaidó, whom the U.S. and dozens of other countries recognize as Venezuela's legitimate head of state, has called for opening up Venezuela's oil sector to more private investment. That could expose Russian companies to some unwelcome foreign competition.

Russia has also spent a lot of money and resources keeping Venezuela's troubled government afloat. Reuters estimates that Russian sources have loaned Venezuela $17 billion since 2006; and Putin recently dispatched about 100 troops to the country. Maduro's government still owes Russia billions of dollars; a new government might be less willing to honor those deals.

And Venezuela has strategic value for Russia as well: Putin's support for Maduro gives Russia a foothold in Latin America, relatively close to the U.S. Russia flexed this leverage last December when it briefly sent two advanced bombers capable of carrying nukes to military bases in Caracas.

U.S. Secretary of State Mike Pompeo has warned Russia that supporting Maduro's claim to power "risks prolonging the suffering of the Venezuelan people," while Russia has accused the U.S. of trying to support a coup against Maduro.