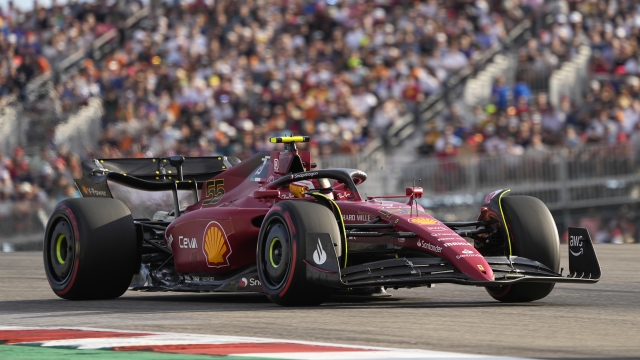 Formula 1 is no stranger to Vegas, holding races back in 1981 and 1982, but the events crashed and burned.

On Sunday, Max Verstappen won for a record-tying 13th time this year.

F1 race cars are open, single-seaters and are among the fastest cars in the world.

Austin and Miami have been the two U.S. stops, but next year there will be a third as F1 adds Las Vegas to their list.

Las Vegas is getting ready to park the slot machines, out a red light at the blackjack tables and roll the dice with one of the most popular sports in the world.

With Sin City betting billions of dollars on Formula 1 auto racing, there is no guarantee come next November what happens in Vegas will stay in Vegas.

"They really are convinced that this will be such a draw around the world. You can imagine right below us, on that street. We're gonna be having cars going 200 MPH," said Governor Steve Sisolak.

So convinced that formula one will be such a draw, the famous venetian hotel – known for its authentic Italian-style gondolas floating along in artificial canals – is renovating its grounds to the tune of one billion dollars to allow for fast-moving open wheel race cars zooming past the luxurious hotel.

Additionally, MGM Resorts is planning to buy between $20 million and $25 million worth of tickets, then offer 4-day packages for fans priced at $100,000 or more.

Formula 1 is no stranger to Vegas, holding races back in 1981 and 1982, but the events crashed and burned.

"It was in the parking lot. If you look at Caesars Palace as it exists today. It's now where the Forum Shops lie. I mean, we were a city of what about 300 to 350,000 people here perhaps, and it didn't attract the locals at all. They didn't like the track very much. The racers, the drivers," said Tony Cordasco, a veteran Las Vegas Sportscaster.

But this time it's going to be completely different. Plans call for Las Vegas' F1 race to cover 50 laps on a 3-point 8-mile track past the posh resort hotels on the iconic Las Vegas strip under all those bright neon lights with a 10 P.M. start time.

The event, though, is not only about speed. Formula 1 is also paying attention to the city's needs.

Ticket buyers will be asked to donate a lucky seven – $7.77 – to the Las Vegas Grand Prix Foundation, which will distribute the accumulated donations to Las Vegas community charities, including providing one million free meals through the Three Square's hot food rescue program.

But even as the F1 tour heads into its final five races of 2022, the drivers know the Vegas race will post new challenges.

Driver Lewis Hamilton said "Knowing that it's a real party city … it's difficult for a racing driver to stay focused that weekend. There's going to be so much going on."

And driver Valterri Bottas said, "I've been once to Vegas. When I left, I said 'Never again.' But I'm coming back. I might need to try to behave better than I did last time."

Drivers and fans will get a first-hand taste of Las Vegas on Saturday Nov. 5, when F1 holds its Las Vegas Grand Prix launch party.

They're planning an eye-popping day including a live car run.