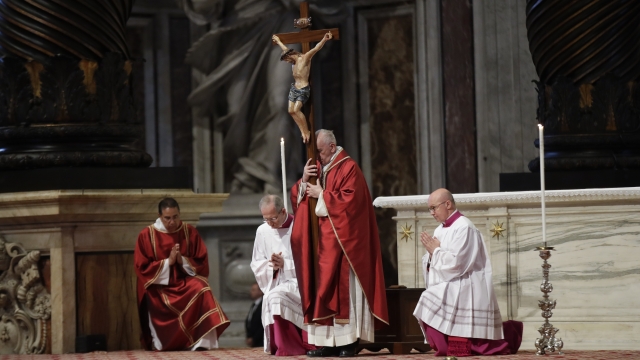 SMS
Vatican Holy Week Celebrations 'Under Study' Amid Coronavirus Outbreak
By Briana Koeneman
By Briana Koeneman
March 16, 2020
A Vatican spokesperson said all celebrations during the week before Easter are "confirmed," but it's unclear if the public will be allowed to attend.
SHOW TRANSCRIPT

Holy Week ceremonies at the Vatican could proceed without the public this year as Italy tries to curb its ongoing coronavirus outbreak.

A Vatican spokesperson told reporters all celebrations during the week before Easter, April 5-11, are "confirmed." But he said how those events will be conducted and who will be allowed to attend is currently "under study."

It's unclear when those decisions will be made. But the spokesperson added all celebrations will be broadcast live via radio and television.

As of Monday, there were more than 24,000 confirmed coronavirus cases in Italy, according to Johns Hopkins. The number of deaths related to the virus was over 1,800.

The Italian government has imposed tight restrictions on its citizens in an attempt to stop the virus from spreading further. All nonessential businesses are closed, sporting events are canceled, schools are shut down and people have been ordered to stay home except for essential travel.

But the lockdown didn't stop Pope Francis from briefly leaving the Vatican Sunday. He visited two churches in Rome to pray for an end to the pandemic.