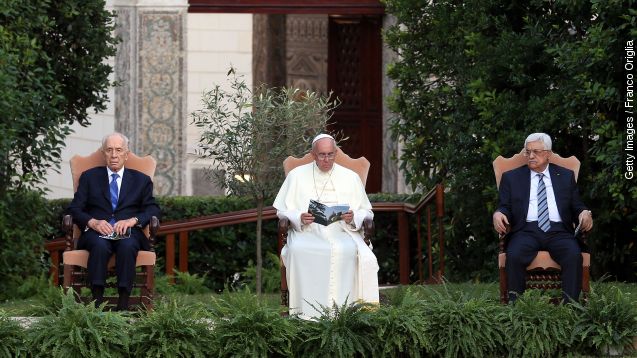 SMS
Vatican Earns Israeli 'Disappointment' For 3-Word Phrase
By Jake Godin
By Jake Godin
May 13, 2015
The Vatican announced it had nearly completed a treaty with the "State of Palestine," a phrase that carries weight in two-state negotiations.
SHOW TRANSCRIPT

The Vatican has officially recognized Palestine as a state. (Video via Vatican Television Center)

The Vatican announced Wednesday it was ready to sign a treaty with the "State of Palestine." (Video via Vatican Television Center)

For the most part, it's a simple follow-up to an agreement made in 2000 regarding the Catholic Church's operations within Palestinian territory and bilateral relations between the two.

But there's one important difference between then and now. In 2000, the Holy See referred to their treaty partners as simply the Palestinian Liberation Organization, or PLO. This latest agreement uses the State of Palestine.

While the Vatican has used those three words for a while now, this is the first time they'll be inked onto an official legal document. (Video via Vatican Television Center)

Not that Pope Francis hasn't made his opinion about the sensitive issue known already. As recently as last May, he called for a two-state solution while visiting Bethlehem. The Vatican reaffirmed its support later that year in October.

And yet news of the treaty, which has yet to be signed, has managed to strike a nerve in Israel.

One senior Israeli foreign ministry official told The New York Times Israel was "disappointed" by the language and that it'd be a setback in direct and bilateral relations.

The reason for the disappointment likely lies in the fact that the Vatican's treaty adds to the increasing number of international parties which are recognizing, symbolically or officially, the "State of Palestine" amid the stalled Palestinian-Israeli negotiations. (Video via Office of Palestinian Authority President Mahmoud Abbas)

And the more support the Palestinian Authority receives toward achieving statehood, the more breathing room it'll have when those negotiations resume. That's something that may force Israel to make unwanted concessions. (Video via Office of Israeli Prime Minister Benjamin Netanyahu)

Those concessions could include any number of issues, which held up talks the last time they were held in 2013 and 2014. Two of the biggest sticking points were Israeli settlements in the West Bank and basing the solution on the pre-1967 borders. (Video via France 24)

Palestinian Authority President Mahmoud Abbas will be meeting Pope Francis on Saturday during a visit to Rome where two 19th-century Palestinian nuns are to be canonized.