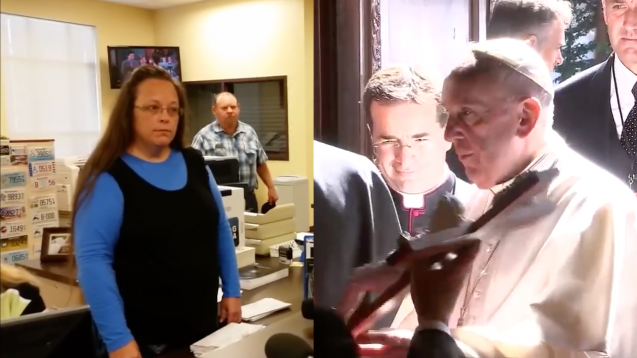 The Vatican is trying to pump the breaks on stories about the pope's meeting with embattled Kentucky clerk Kim Davis. (Videos via YouTube / davidvmoore1976 and Vatican Television Center)

In a statement, a Vatican spokesperson said: "Pope Francis met with several dozen persons. ... Such brief greetings occur on all papal visits and are due to the pope’s characteristic kindness and availability."

Sounds like they don't quite want to jump into the U.S. same-sex marriage debate, despite Davis' interpretation of the meeting. (Video via CNN)

"Well, it was really very humbling to even think that he would want to meet me or know me," Davis told ABC.

At the meeting in the Vatican's embassy in D.C., Davis and her lawyers say the pope told her to "stay strong" and thanked her for her courage.

But the Vatican's statement made sure to clarify that the meeting wasn't an endorsement, and said, "The pope did not enter into the details of the situation of Mrs. Davis."