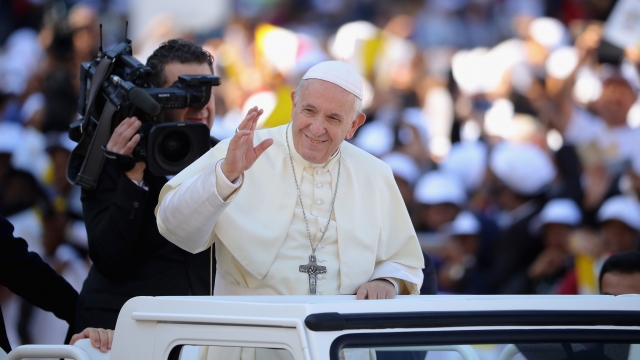 Earlier this week, Pope Francis said the abuse was so severe at one French congregation that it reached "the point of sexual slavery."

The Vatican is attempting to clarify a comment Pope Francis made earlier this week about nuns being sexually abused by Catholic priests and bishops.

He told reporters Tuesday that the abuse has at times been so severe for religious sisters in one French congregation it reached "the point of sexual slavery."

A Vatican spokesperson now says the pope didn't mean the nuns were actually forced into sex slavery, but that they had been sexually manipulated.

That French female congregation was dissolved in 2005 by Pope Francis' predecessor, Pope Benedict XVI. But Francis says the sexual abuse of nuns is still an ongoing issue.

Tuesday was the first time Pope Francis publicly acknowledged the issue. Up until this point, the majority of the Catholic Church's clergy sex abuse scandal has revolved around the abuse of minors.

Back in August, the pope issued a letter to all Catholics condemning sexual abuse by priests, as well as its coverup. He's scheduled to hold a summit with other top Church officials later this month to discuss preventing clergy sex abuse.