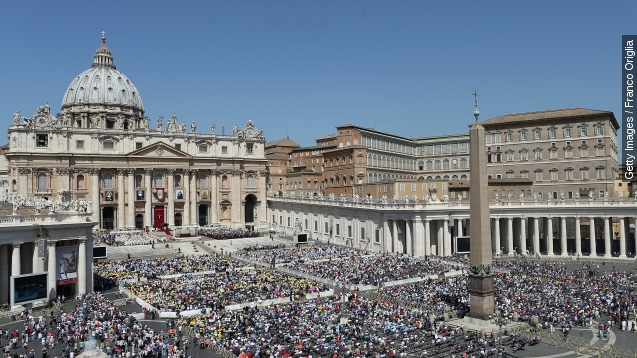 SMS
Vatican Bank Reports New Profit To Go With New Reforms
By Matt Patston
By Matt Patston
May 25, 2015
The Vatican bank reported its profits were back to normal after a difficult 2013.
SHOW TRANSCRIPT

The Vatican bank reported a strong 2014, showing signs of recovery after 2013 reforms cut its profit margin by 97 percent.

The bank's profits jumped from 2.9 million euros in 2013 to 69.3 million euros, or about $76 million, last year. The numbers indicate a recovery from exhaustive and costly reforms enacted by Pope Francis.

The bank — officially known as the Institute for Religious Works, or IOR — only began reporting financial holdings in 2013 after the bank was hit with a money-laundering scandal. That report listed 2012 profits at 86 million euros, or about $94 million, and laid out a sort of mission statement for bank reform.

Then-President Ernst von Freyberg wrote that the IOR is "a small, conservatively managed financial institution of the Catholic Church that serves those spreading the Word of God around the world."

The Vatican's reforms have been made with that mission in mind: It tightened laundering rules, increased transparency and cut out 4,614 accounts that were either inactive or didn't meet the bank's standard for clientele.

In some ways, the IOR is a normal European bank: It uses the euro, and it reinvests deposited holdings.

But the Vatican bank doesn't accept business clients, and it tries to keep operations self-contained. Its clientele is mostly clergy, and its ATM transactions are in Latin.

Its role, in short, is to help bolster Vatican finances by safely managing Catholic money.

But until recently, one of the bank's operations was hiding non-Catholic money. Its behind-closed-doors operations allowed certain accounts to circumvent the stricter regulation of foreign governments. (Video via Euronews)

A laundering scandal entangled bank officials and clergy. Upon taking office in March 2013, Pope Francis made ethical bank reform a priority, which meant sacrificing 97 percent of its profit.

The 2014 annual report, which was released on Monday, has provided the IOR with some much-needed good press, and the profit jump lends valuable legitimacy to the pope's reform effort.