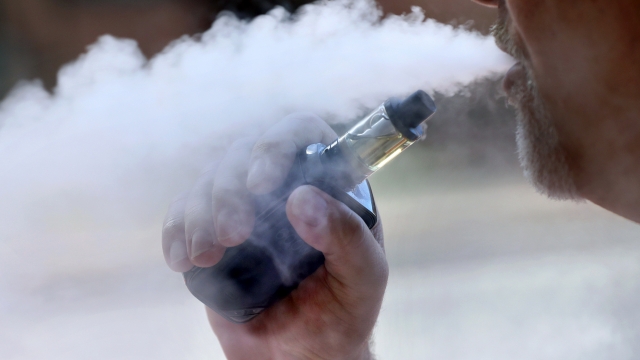 SMS
Could Vaping Increase Coronavirus Risk?
By Kellan Howell
By Kellan Howell
March 6, 2020
Because the coronavirus directly attacks the lungs, it could be more dangerous for people who have weaker lungs from smoking or vaping.
SHOW TRANSCRIPT

A new case of the novel coronavirus in New York City has some health experts worried about the risks for people who vape.

Mayor Bill DeBlasio announced this week that two new cases of coronavirus were confirmed in New York City — one of them a man in his 40s.

Both patients had substantial pre-existing conditions. In the case of the man in his 40s — respiratory issues related to smoking and vaping.

"Any time we hear that it's somebody who's not 70, 80 or 90 years old, we immediately get a little bit more worried, and especially somebody in their 40s," said Dr. Laura Crotty Alexander.

Dr. Crotty Alexander, a pulmonologist who studies vaping, says she's concerned that it could make people more susceptible to infections like the coronavirus.

"Inhaling the chemicals that are in the e-cigarette aerosols — most people call it e-cigarette vapor — inhaling those chemicals does alter your immune system both in the lungs and in your circulation," she said.

And Dr. Crotty Alexander says this new strain of the coronavirus directly attacks the lungs and could be more dangerous for people who have weaker lungs from smoking or vaping.

"If the virus directly kills the cells lining your airways in your lungs, then, you know, you're losing parts of your lungs that you shouldn't be losing. And unfortunately, when that happens, that can create a lot of inflammation ...  And so you become short of breath. You can't get oxygen exchange," she said.

Vaping has skyrocketed in recent years, particularly among young people. The CDC reports nearly 1 in 10 middle schoolers and nearly 30% of high schoolers said they vaped in 2019.

Dr. Crotty Alexander says we still don't know enough about the coronavirus to be sure whether vapers are more susceptible.

But she says: "The bottom line is your lungs were developed and they evolved to exchange oxygen and carbon dioxide. So they really were not prepared to inhale these chemicals that are in these clouds coming out of these devices. And so they are suffering from the inhalation of these chemicals."