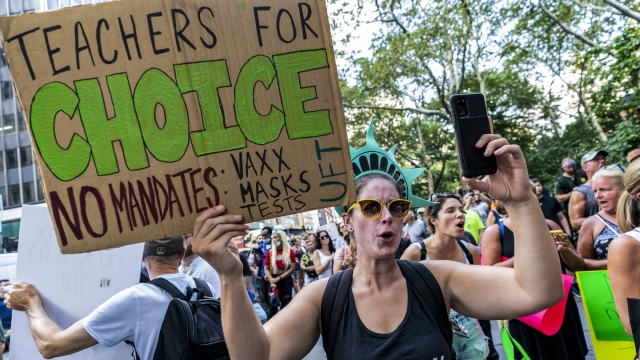 The state's Department of Education tells Newsy that roughly 500 employees have been granted a vaccination exemption.

Today is a big day in New York City Public Schools with the controversial COVID-19 vaccine mandate now in effect for teachers and staff.

Employees will be suspended and could also be fired if they don't comply. The deadline is today at 5 p.m. If employees don't show proof they have received at least one dose of the COVID-19 vaccine, they will be told not to return to school.

Close to 3,700 substitute teachers could be needed to fill the potential gap that could be left by unvaccinated teachers in the nation's largest school system.

"We have more subs that are vaccinated than unvaccinated teachers, and our superintendents have been working with principals to develop plans to ensure our students get the education and continue to get the education they deserve in person," said NYC Schools Chancellor Meisha Ross Porter.

The roughly 15,000 employees who refused to get the vaccine — including about 5,500 teachers — have the choice of taking a year of unpaid leave with health insurance or leaving the Department of Education with severance.

Stephanie Edmonds, a New York City teacher, says she will not take the vaccine despite the mandate because it goes against her religious beliefs.

"I'm speaking out today for teachers who have a whole host of objections whether they be religious, medical, philosophical, and I am part of the class-action lawsuit," said Edmonds.

The Department of Education tells Newsy that roughly 500 employees have been granted a vaccination exemption, translating to about 0.03% of the entire workforce.

Sarah Casanovas from the New York City Education Department tells Newsy the department is still waiting on new numbers but according to Friday's figures, roughly 93% of teachers are vaccinated.