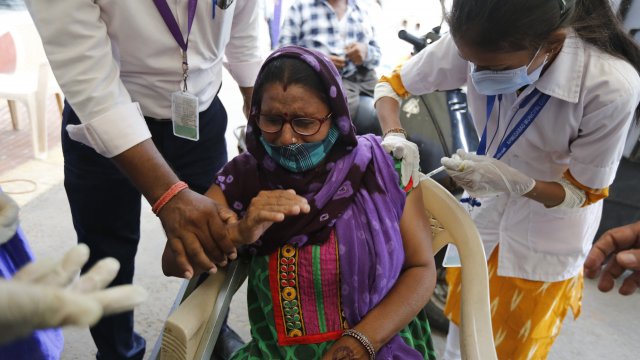 Health officials are calling on more Americans to get vaccinated, fearing new infections from a COVID-19 variant first found in India and now prevalent in the U.K.

But the U.S. vaccination rate is slowing down. Cases are rising in some areas, with many people still hesitant to get the shot.

As of now, at least 64 % of the U.S. population has gotten at least one vaccine dose, and 54 % are fully vaccinated. But it's looking like President Biden may fall short in his goal of having 70 % of Americans get at least a single vaccine shot by July 4.

CDC data shows the goal may be hard to reach because of greater resistance to vaccinations in states won by Donald Trump in 2020. States won by Joe Biden are already averaging close to the 70 % threshold. But, in states carried by the former president, the percentage of adults getting shots is just under 55 %.

Those political choices may be challenged by a new virus mutation: the Delta variant. It has caused widespread infections and deaths in India. It's causing new case spikes in the UK,  and it's inspiring Dr. Anthony Fauci to encourage more Americans to get vaccinated.

"We don't want to let happen in the U.S what is happening currently in the U.K.," said Fauci said.

The Delta variant - first discovered in India - came to the U.K. fast, just as the country's restrictions were expected to be lifted by June 21. It's accounting for 91% of new cases there, and in the U.S. 6% -- doubling its prevalence in the last week.

It's also spreading in southeastern China, with doctors saying the symptoms are more dangerous than the initial version of the virus they first saw.

At the G-7 summit happening this week, President Biden and other world leaders are encouraging vigilance and an "all in this together" mindset to prevent new outbreaks.

"As long as the virus rages elsewhere there's a risk of new mutations that could threaten our people," President Biden said.

G-7 leaders are calling for a global effort to distribute 1 billion additional vaccine doses. The White House is pledging to provide 500 million of those doses to other nations.