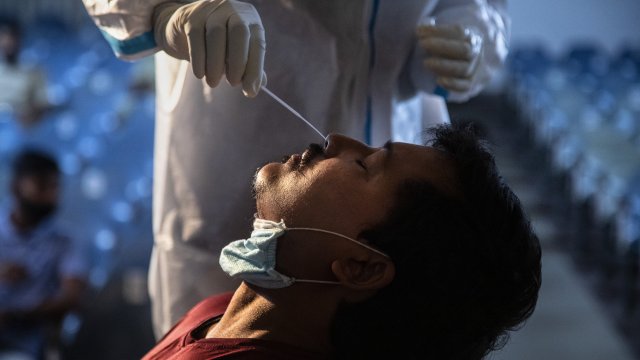 SMS
As U.S. Vaccinations Increase, Pandemic Is Grim In India, Elsewhere
By Alex Arger
By Alex Arger
May 1, 2021
As more people are vaccinated in the U.S., India and South America are suffering record daily deaths from pandemic.
SHOW TRANSCRIPT

More than 101 million Americans are now fully vaccinated against the coronavirus. People are gathering in public again, with Disneyland reopening on Friday and fans turning out again at the famed Churchill Downs horse track. But elsewhere, the picture is grim - and worsening.

In India, in particular, infections and deaths from COVID-19 are surging alarming rates. On Saturday, India reported more than 401,000 new infections in a single day, the 10th straight day with more than 300,000 cases. To date, India has reported over 19 million infections and more than 211,000 deaths. But actual toll is believed to be far larger.

Thousands there are lining up, hoping to get life-saving oxygen -- which is in short supply for India's over-packed hospitals. On Saturday, eight COVID-19 patients, including a doctor, died at a hospital in New Dehli after it ran out of medical oxygen.

And 16 coronavirus patients and two health-care workers were killed when a fire broke out in a hospital ward in western India. It was India's second deadly hospital blaze in two weeks.

The country just expanded its vaccine program to everyone above the age of 18 on Saturday, with the government hoping that'll curb the surge. But India's vaccine supply is expected to fall short of the demand.

"The only solution for India is to vaccinate itself out of this pandemic, and the world really needs to help."

This week, the White House issued a ban on travel from India to the U.S. -- starting Tuesday. And it also committed to helping the country, including sending vaccine-making materials, rapid tests, oxygen and protective gear.

The Biden administration also announced its intention to make up to 60 million doses of the AstraZeneca vaccine available to other countries, so long as it's deemed safe by federal regulators. It isn't approved for use in the U.S.

"And America, you must know the people working to administer vaccines are heroes. It's time for each one of us to do our part," Vice President Kamala Harris said.

Though the U.S. is hitting new milestones for vaccinations, many people remain hesitant about getting their shots. So while infection rates are slowing nationally, some states - like Michigan - are still experiencing infection spikes.

And doctors are seeing a demographic shift, from elderly patients to a growing number of young and middle-aged adults who are now being treated for the virus. The likelihood of a younger person

dying from the virus is still low, but Dr. Anthony Fauci is urging them to take precautions - and get vaccinated.

"You've got to think beyond yourself and say, if I’m a young person and I don't want to get vaccinated, but I get infected," Fauci said. "You may infect someone inadvertently and I’ll use the word innocently. I don't think anybody deliberately wants to do that. Then you'll pass the infection on to someone else who might pass it on to someone else who might get seriously ill and might die.”