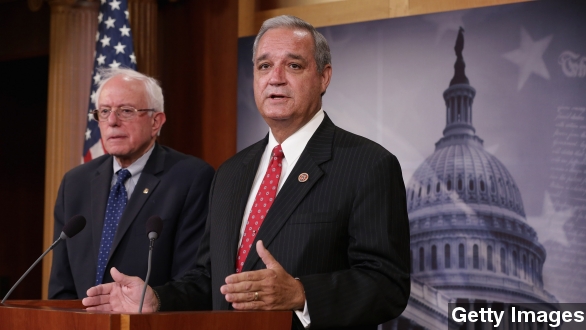 Congress' annual 5-week summer recess is coming up in just a few days, but legislators in the House and Senate are looking to pass one more measure before the break — a long-awaited reform bill meant to fix problems at the troubled Department of Veterans Affairs. (Via Getty Images)

"The veterans of this country deserve the best quality healthcare that they can get in a timely fashion, and that has not been the case as of late." (Via C-SPAN)

Republican Rep. Jeff Miller and Independent Sen. Bernie Sanders, both chairmen of Veterans' Affairs committees in the House and Senate, announced a compromise deal to reform the veteran healthcare system on Monday.

The bill comes two months after scandals about long wait times at VA hospitals forced former VA secretary Eric Shinseki out of office. Revelations that veterans were waiting for months to receive healthcare, and some hospitals were covering up those long wait times, sparked bipartisan outrage and calls for reform. (Via CBS, CNN)

This latest proposal aims to cut down on those wait times by allowing veterans who've been waiting for more than 30 days for VA care, or who live more than 40 miles from a VA facility, to seek private care instead. The plan authorizes $10 billion in emergency funding for the VA to cover the cost of that private care.

It also seeks to address some of the long-term issues plaguing the VA by providing $5 billion for new staff and facilities, and making it easier to fire misbehaving VA officials, among other provisions. Sanders estimates the bill will provide $12 billion in new funding to the VA over the next several years.

​"We are going to put substantial sums of money into the VA so that long-term they're going to solve these problems, have the doctors, the nurses, and the space that they need, so we'll do away with these long waiting periods." (Via MSNBC)

But despite the intense political pressure to fix the problems with the Veterans Affairs Department, this compromise almost didn't come to pass. And it's all because of the price tag of reform.

Last week Sanders and Miller appeared to be at an impasse on the bill after their committees came up with separate plans which were billions of dollars apart in terms of cost. At the time, Sanders accused Miller of being "not serious about negotiations." (Via The Hill)

It's also important to note this proposal still has to make it past Congress, where a previous reform effort failed after an astronomical $50 billion cost estimate from the Congressional Budget Office. (Via Roll Call)

Still, The Washington Post reports there's a good deal of optimism on Capitol Hill that this latest proposal will be passed, mostly because the members of Congress want some good news to take home with them during the summer break.

"With several significant, complex issues left unresolved, including President Obama's request for emergency funding to deal with the influx of immigrants along the U.S.-Mexico border, lawmakers have been saying for weeks that leaving for recess without resolving the veterans' health-care crisis would be embarrassing and would justifiably spark voter outrage."

Lawmakers are looking to expedite the bill's progress through the House and Senate, and hope to bring the measure to a vote by Thursday. Friday is the last day before Congress' summer recess begins.