Va. Delegate Backs Off Filing Articles Of Impeachment Against Fairfax 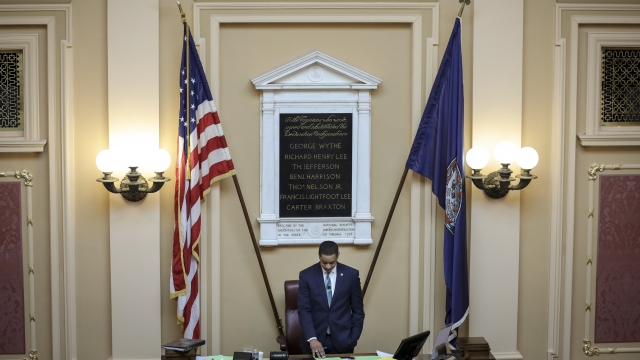 A Virginia delegate backed off plans to file articles of impeachment against the state's lieutenant governor Monday.

In the last week, two women have accused Justin Fairfax of sexual assault. Fairfax has denied both accusations, claiming his encounters with both women were consensual.

But a draft resolution that was circulated Sunday by Democratic state lawmakers called the two allegations "credible in nature." It also calls on a legislative committee to investigate the claims.

Democratic Del. Patrick Hope — who had wanted to introduce articles of impeachment against Fairfax Monday — said after that draft circulated, he received "an enormous amount of sincere and thoughtful feedback which has led to additional conversations that need to take place before anything is filed."

The resolution would be the first step of a possibly lengthy removal process. The House of Delegates would first need a simple majority vote to impeach Fairfax. Then things would move to the Senate, where lawmakers would hear testimony and evidence. Fairfax would only be removed from office if two-thirds of the senators present voted against him.

A spokeswoman for Fairfax said Sunday, "The Lt. Governor is confident in the truth that will emerge from an independent impartial investigation."

Fairfax is just one of Virginia's top lawmakers embroiled in a scandal. Gov. Ralph Northam and Virginia Attorney General Mark Herring both face calls to step down that stem from wearing blackface when they were younger.

If all three men give up their posts, the next person in Virginia's line of succession is the speaker of the House of Delegates. That job is currently held by a Republican. Northam, Fairfax and Herring are all Democrats.