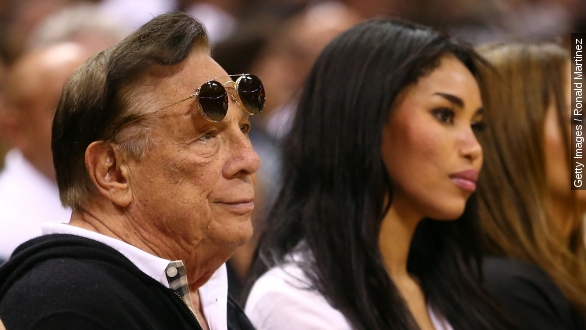 SMS
V. Stiviano Must Pay $2.6M To Donald Sterling's Wife
By Katherine Biek
By Katherine Biek
April 15, 2015
Shelly Sterling sought $2.8 million from Stiviano, and the judge ended up ruling in her favor, awarding her almost all of what she asked for.
SHOW TRANSCRIPT

This has been a long-winded legal battle that began before an audio recording between Stiviano and Donald Sterling leaked in April 2014.

The recording ended up costing Sterling ownership of the Clippers' franchise.

"I am banning Mr. Sterling for life," NBA commissioner Adam Silver announced in 2014.

In the lawsuit, Shelly said since 2010, her husband had spent around $3.6 million buying gifts for Stiviano. While Shelly claimed Donald used shared assets to purchase those items, Stiviano said the Sterlings were separated when Donald gave her those gifts. (Video via CBS / "Entertainment Tonight")

The Sterlings are still legally married, though have been separated and on the verge of divorce for some time now according to reports.

Now the Los Angeles Times got its hand on a sample of the items Donald reportedly gave to Stiviano, and they range from the extravagant to the downright frivolous.

Under California law, anything earned during marriage becomes what's called "community personal property," meaning its shared by both parties and one spouse can't gift of that personal property without the other spouse's consent.

Shelly sought $2.8 million from Stiviano, and the judge ended up ruling in her favor, awarding her almost all of what she asked for.

In a statement, Shelly's attorney said, "This is certainly a victory for the Sterling family, whose funds were dissipated by Donald to lavish millions of dollars of gifts on a conniving mistress." (Video via KCBS)

Something that didn't come to light during the trial was the nature of the relationship between Donald and Stiviano.

While Shelly's attorney's statement certainly makes it seem like the two were very close, The Washington Post reports Stiviano has always stated her relationship with the former Clippers owner was just based on friendship and not romance. (Video via ABC)