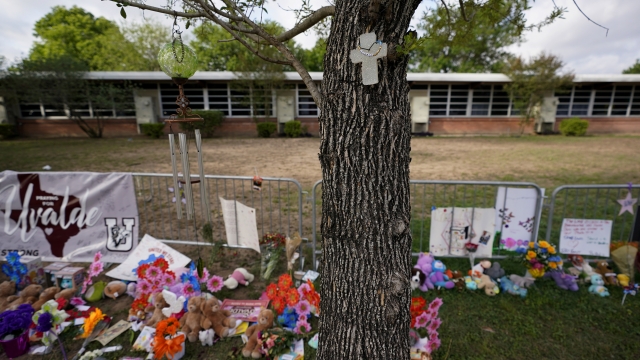 A dark cloud of grief hangs over Uvalde and the surrounding community.

Dr. Ronald Stewart leads a trauma team in San Antonio, where shooting victims from Uvalde and other mass shootings have been rushed for treatment.

"You know, it was it was a very sad day for us. My first reaction was to, you know, want to believe that it's not true," he said. "It is the worst to be able to tell the mom of a small child who is normal at breakfast that that child, that child is now dead."

Dr. Angelique Snyder, a pediatric psychologist at the Children's Hospital of San Antonio, has been going to Uvalde to offer support to the families and children affected by the mass shooting.

"There's going to be a portion of individuals who do develop pretty significant and severe long-term reactions," she said. "Access to care is probably the biggest issue for communities like this. Most mental health providers are located in higher income areas."

More than 80% of Uvalde's population is Hispanic and almost 80% are economically disadvantaged. Snyder says these factors put the community at risk of not properly dealing with their mental trauma.

"Not having enough providers that may speak your language, especially if you're monolingual Spanish speakers are not having providers that look like you or can understand your culture."

Meanwhile, Dr. Stewart is putting his efforts toward education and advocacy for change.

NEWSY'S AXEL TURCIOS: We're talking about children. What's the impact on such a young, small body to receive a gunshot wound from a high caliber firearm?

The American College of Surgeons is advocating for bipartisan solutions to reduce deaths and injuries caused by firearm violence.

"One of the recommendations is these shootings should be considered terrorist actions, even if they're not ideologically motivated," he said. "It is very frustrating to me that to know that there is a better path, that we can work together and yet to not come together. We owe it to those those children, those teachers."