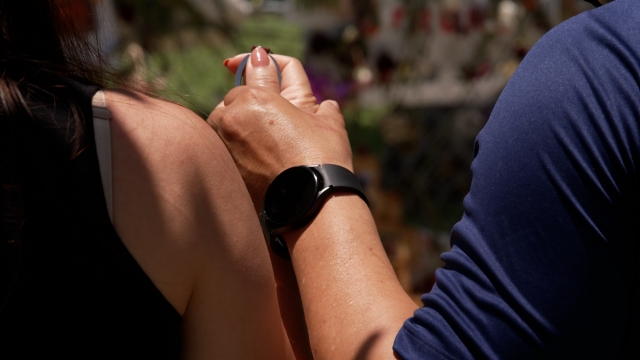 SMS
Uvalde Residents Struggle To Find Access To Mental Health Care To Cope
By John Mone
By John Mone
June 8, 2022
Many of the residents in Uvalde, Texas are going to need mental health services to cope with the trauma they've experienced after the mass shooting.

In the wake of the Robb Elementary School shooting, the pain is still visceral.

Clad in a cowboy hat, David Graham is a stranger to town. He's the first to admit he's not a mental health professional. He came to Uvalde, Texas simply to listen, as he's done after other gun tragedies.

"The thing is, it costs nothing to use your ears," he said. "And because I'm not a rabbi or priest or counselor, I don't give counsel. I just ask people how they're sleeping and let them talk."

What was already in short supply in Uvalde — therapists able to help people sort through emotions and mental illness.

"An issue that happens that I can see is that there's no health care coverage for young men between the ages of 18 and 65," said professional counselor Jaclyn Gonzales.

Census data shows Uvalde county is majority Hispanic, has a 19% poverty rate, and that more than 25% of people here have no health insurance.

Gonzales is among the few  professional counselors available locally.

"There's issues that existed here before this. You know, there's things that this town has suffered through before," she said. "Any time you experience trauma, any type of trauma, where the what you get is you feel unsafe, you feel like you can't trust."

Gov. Greg Abbott attributed the Uvalde mass shootings to mental health issues, except earlier in April, he and other state leaders authorized cutting the budget of the Health and Human Services agency by roughly $211 million all for a border security program dubbed "Operation Lone Star." That money could help local mental health agencies in poorer rural counties like Uvalde, except it's going to pay for continued deployment of National Guard soldiers along the Rio Grande River.

"They spent $4 billion in less than a year along the border, chasing a fiction, so that he can look tough, so he can wear his tactical shirts along the border and look tough for his constituency?' state Sen. Roland Gutierrez asked.

Texas ranked last amongst all 50 states and the D.C. for overall access to mental health care, according to the 2021 State of Mental Health in America Report.

Will Francis is with the National Association of Social Workers in Texas.

"I would not call this a mental health crisis. I would call it a mental health response to a crisis of violence. But our mental health services were already woefully underfunded," he said. "There are over 50 counties that don't even have a clinical social worker in them."

Francis says Texas leaders made a political choice not to expand Medicaid under the Affordable Care Act, which leaves funding on the table.

"It's tragic and it means there's over a million people in a coverage gap," he continued.

Until then, the traumatized of Uvalde will make due with limited resources and the kindness of strangers.