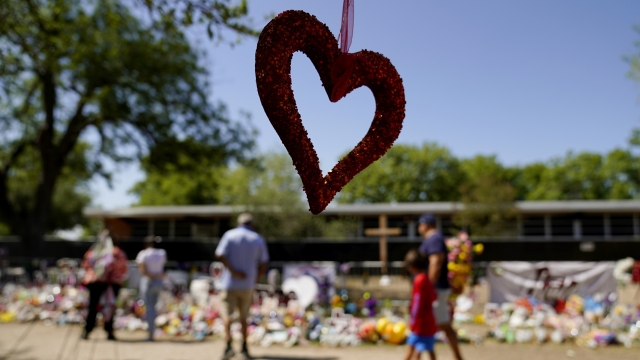 Video footage has been shared from Robb Elementary School cameras of the shooting in Uvalde, Texas. But there's also footage from one officer on the scene.

That perspective shows up in the video published by The Austin American-Statesman and KVUE around 35 minutes after the incident begins, giving the point of view of officers on the scene.

They walk the hallways in the school, and you can see them positioned in front of the door. The sound is muddied, but you can discern that they are looking for a key to enter the classroom.

The actions, or inactions, of the officers is a key part of the investigation.

"They just didn't act. You know, they just didn't move. They ... I just don't know what was going through those policemen's minds that tragic day, but everything said, it was just no action on their part," he said.

Texas State Sen. Roland Gutierrez echoed the concern and said there are other angles of the shooting response yet to be made public. He added that the leaked version doesn't show the terrifying power of the gunman's rapid fire toward police officers.

"You see construction material flying over their heads as they're crouching down to avoid being hit," Gutierrez said. "They get repelled twice. And yet, the Republican party has shown us props of doors, we've seen props of windows in these testimonies in committee hearings, but we've never seen a prop of an AR-15."

There are mounting civil actions being considered by parents of victims and parents of Robb Elementary School survivors. Mark Di Carlo is an attorney for 19 families connected to the tragedy, who says the video raises many issues for his clients.

"I think most people are very offended by the amount of time," he said. "One of my clients intimately involved and tragically hurt specifically infer that they felt that the actions of the officers were grossly negligent."

Newsy also expects another report Sunday, which would be written by a special Texas State House committee. Their conclusions are being made public for the first time, as the testimony gathered from law enforcement and officials has all been behind closed doors. The members say they will meet with Uvalde parents to discuss their findings and walk them through a copy of the hallway video the committee obtained.