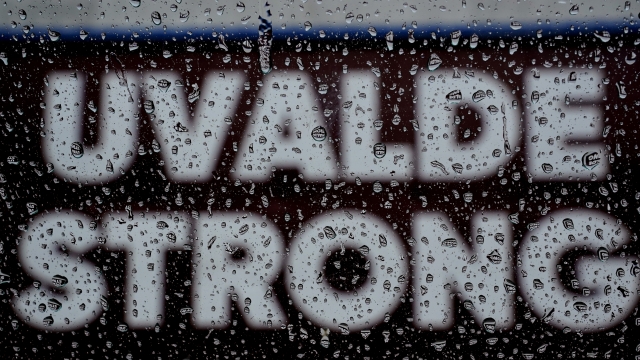 The trajectory of a tragedy more than five months later could mean a shift in the political landscape in Uvalde, Texas.

"Uvalde Strong" signs are everywhere, and for some in the Texas town struck by the mass shooting at Robb Elementary, which left 19 schoolchildren and two teachers dead back in May, the feelings are also strong that the status quo must be upended.

Emotions are still raw at school board meetings as parents are looking for new leadership.

Angie Villescaz shared their pain. Though she's not directly affected by the shooting, the Uvalde native started a group she dubbed "Fierce Madres." Newsy caught up with the group as they wrote postcards for a voter outreach effort for Texas Democrats.

The group wants to change the local and state political map. One result: a member is now going to serve out the rest of city councilor Pete Arredondo's term. You may recall Arredondo was Uvalde's school district's police chief. The district fired him back in August, and he never assumed his council seat.

"Here I am, you know, I know that the desk that sits up there — City Council — is all men and I'm going to be the only mom," said Eloisa Medina, the Uvalde City Council member-elect.

Medina ran unopposed. She and Villescaz said their political will was forged in the fire of community pain.

"There's a lack of trust in law enforcement or the school district administration, right? Like, they're scared. They're scared to leave their children in the hands of 'oh step back! You know, we've got this taken care of.' They've seen where the families in Uvalde were lied to," said Villescaz.

A slow drip of information showed a bungled police response and an ever changing narrative has rocked Uvalde.

Fierce Madres volunteer Bobby Tafolla believes that if it wasn't for the scrutiny from outside police agencies and the media, the truth would never have come to light.

"They've done that to us forever. The White man has spoken, and this is the way it's going to be. But what happen to these people is that the whole United States was watching," said Tafolla.

The crime reopened old wounds of a racist past, which the people of Fierce Madres say resulted in historically low voter turnout among Hispanics, who are the demographic super majority.

Midterm elections typically bring less voter interest. But in data obtained by Newsy, we found that nearly 17,500 people have registered to vote in Uvalde County for the next month.

That’s slightly more than the number for the 2020 presidential election, when voter turnout in Uvalde County was at almost 60%.

Another sign of an energized electorate: The number of volunteer deputy registrars, who are people who can officially register Texans to vote, increased more than fivefold after May 24, from seven to 37.

"I think that this massacre has inspired a lot of people to look at their own local government and suggest that they want different things to be happening," said Texas Sen. Roland Gutierrez.

There are three write-in candidates vying for a spot on Uvalde's County Commission. For Javier Cazares, it's deeply personal. His daughter Jackie was among the students who died. He's campaigned with other aggrieved Uvalde parents for the Texas governor to call for a special session to change the state's lax gun laws. The 43-year-old father has said he didn't even vote in 2020. Now, he's seeking elected office. His brother-in-law Jesse Rizo, Jackie Cazares' uncle, explains why.

"And I think that's where Javier gets his energy. He said 'I don't want my child to die in vain, pass away in vain. I'm never going to get to see her again. I'm going to try my best so that somebody else doesn't have to go through this kind of pain again,'" Rizo said.

Diana Olvedo Karau is vying for the same seat.

She's a retiree who moved back home to Uvalde in 2018 and has made herself a constant presence at school board and City Council meetings.

"I think May 24 has helped people find their voice. And people are challenging the status quo," said Karau.

She's a retiree who moved back home to Uvalde in 2018 and has made herself a constant presence at school board and city council meetings.

"We need to take government back and help it work for us," said Karau.

The candidates we spoke with all lack political experience, but say they want to turn Uvalde's pain into a positive purpose and build a movement.

"So, there are people that are sitting there right now at their desk at work, or at home in the kitchen, and they're thinking,'I want to step up, I just don't know how to do it. You know, where do I sign up? How do I start my campaign? How do I start my, you know, fundraising?' But that's where we're going to help with that, too," said Villescaz.

Texas has stubbornly low voter turnout and that could be a big obstacle in changing things in Uvalde County. That being said, in the last several election cycles, numbers of voters have been up.