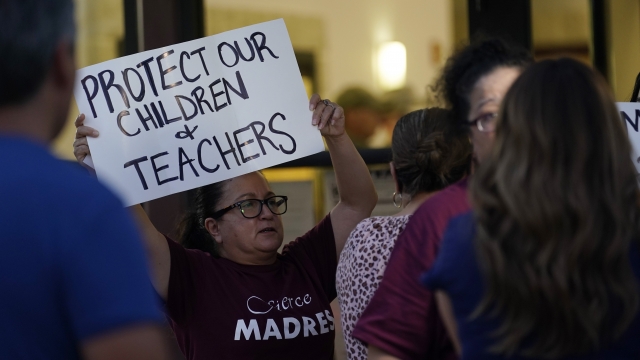 The start of school is about two weeks away in Uvalde.

"I don't understand why you feel the need to have all this protection back here, that was needed that day and this time limit to one minute — It's like you're trying to shut us up," said Javier Cazares, a father of one of the victims.

And parents like Javier Cazares, whose daughter was among 19 children and two teachers killed at Robb Elementary in May, remain angry and exhausted in grief.

"He needs to be gone already, he's had three months to do something," said Cazares.

On Monday, Uvalde's school board reviewed complaints calling for the removal of the superintendent.

Parents filed a set of grievances with the board, some asking for Hal Harrel to be fired or to resign. The board listening to those concerns behind closed doors for two hours.

In the end, they didn't fire or discipline superintendent.

"Three hours we were here and you didn't do a thing," said Adam Martinez, a Uvalde parent.

While the hearing didn't provide the outcome some parents wanted, it showed more of them are getting involved since the mass shooting.

"Do they bother? Do they care? That's what I was trying to tell them, they need to get in touch with the community more," said Martinez.

Martinez says his child was at Robb Elementary and got out. Martinez feels anxious about the school year ahead.

"With the people that are worried… It's small town politics, status quo — that's what we're trying to change. Every time we have these meetings, you see parents who lost loved ones or parents of children who were injured. You see the pain, you see the frustration," said Martinez.