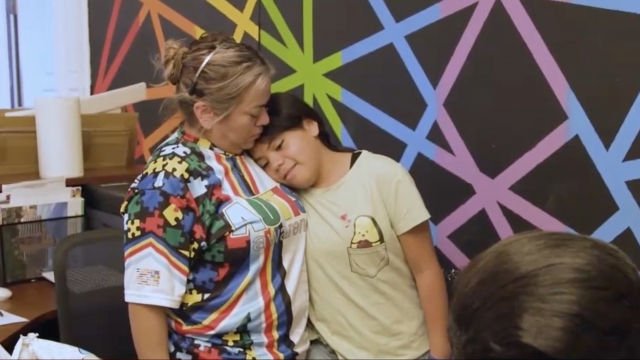 SMS
Uvalde Mother Shares Story Of Daughter's Survival, Community Bond
By Axel Turcios
By Axel Turcios
May 26, 2022
One Uvalde mother shares how her daughter survived the Robb Elementary shooting and how the community is united as a family as they grieve victims.

Esmeralda Zamora tries to concentrate. It's hard, she says. She's still in disbelief that her daughter, 10-year-old Stacie Villarreal, was so close to death in the Robb Elementary School shooting.

On Tuesday afternoon, Stacie was just feet away from the classroom were the gunman barricaded himself and killed 19 children and their two teachers.

"She was two classrooms down," Zamora said. "She said, 'I was just waiting for him to open the door.' Bullets were flying through the walls. She said 'they flew past us.'"

For Zamora, it was a normal workday until her two older kids — both in high school — told her the news.

For over an hour she tried to reach her daughter.

NEWSY'S AXEL TURCIOS: What went through your mind at that moment?

ESMERALDA ZAMORA: Will I hear her again? Am I going to see her again?

Her daughter was able to sneak out of the school and be taken to safety.

"They escaped through the window," Zamora said.

TURCIOS: How are you feeling after everything that happened?

Stacie is in a visible state of shock. She has not been able to sleep.

Zamora says she's feeling a mix of emotions. She is thankful, yet heartbroken. Five of her patients at this pediatric clinic in Uvalde died in the shooting.

"We were supposed to see some of them that afternoon," she said. "We had their checkups already."

TURCIOS: It's incredible how united this community is. Do you think Uvalde will ever recover from this?

ZAMORA: No. Everybody here is family. It's always going to be remembered. There's no recovery from an incident like this.

TURCIOS: Do you ever want to go to that school again? What comes through your mind?

STACIE: That it's going to happen again.