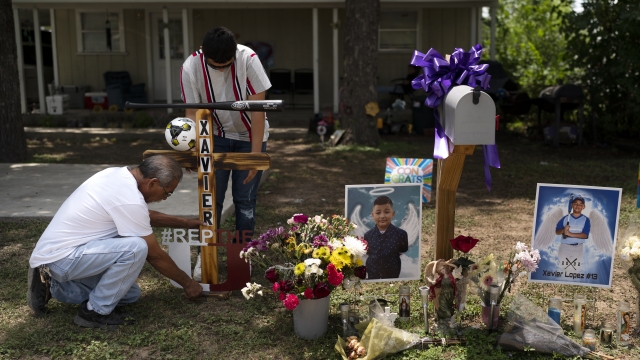 With a name permanently tattooed to his body, Emilio Chapa says it's a constant reminder of his cousin Xavier Lopez.

"He was always laughing and making everybody laugh," he said. "He loved to do TikToks."

The 10-year-old was among the 21 people killed in the school shooting in Uvalde, Texas.

EMILIO CHAPA: They're doing kind of rough. It's been hard lately. My cousin Felicha, her son, she's the one that's been taking it the most. She's been dealing with it hard, real hard.

Chapa says his little cousin was the joy of the family.

"He is always loving, caring, always cared about his mom, always helping his mom," Chapa said. "It's hard to lose somebody like that, especially your little one."

Chapa says that losing his young cousin has made him think about the future of his own children.

"My kids are one and two," he said. "I don't even feel comfortable sending them to school because what if something happens like that, where I'm living at currently and I can't do nothing about it."

Xavier's family decided to bury him beside his friend, Annabell Rodriguez because they were close.

Chapa says they used to play together as toddlers. Their connection grew stronger on their first day of fourth grade at Robb Elementary.

The family says both made the honor roll and texted each other "I love you" the night before both of their lives came to a tragic end.

TURCIOS: What's next for Xavier's family?

In Xavier's obituary, his family said he was an "active young boy" who enjoyed playing baseball. He had been eagerly awaiting a summer of swimming.

Chapa says the family is grateful they have been filled with love and support from the community.