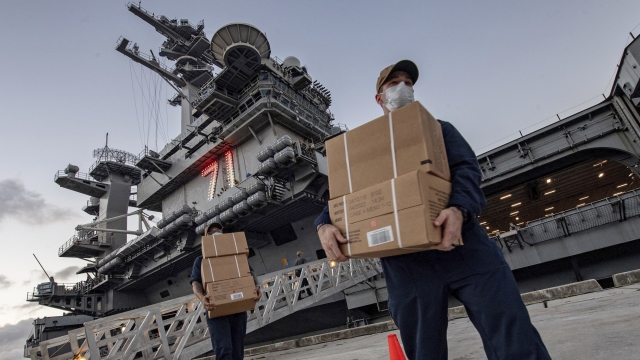 The U.S. Navy is reporting that a sailor assigned to the USS Theodore Roosevelt died on Monday due to complications from COVID-19. The sailor had been in isolation after testing positive for the disease in late March and was later transferred to the ICU of the Naval Hospital Guam.

The Defense Department controls about one-third of the island, and the Guam Hotel and Restaurant Association says it has set aside at least 10 hotels to accommodate the ship's crew. Guam has seen a significant drop in tourism due to the outbreak, which has resulted in hundreds of workers being laid off or furloughed.

The Navy has come under scrutiny recently for how its leadership has responded to the outbreak on the carrier. The ship's commander, Capt. Brett Crozier, was fired earlier this month after he wrote a letter to Navy leaders criticizing the situation on board. The letter was later leaked to the press.

In an audio recording that was also leaked, Acting Navy Secretary Thomas Modly said Crozier was either "too naive or too stupid" to be in charge of the ship. Modly's comments sparked backlash, and he resigned last week after apologizing for his remarks.