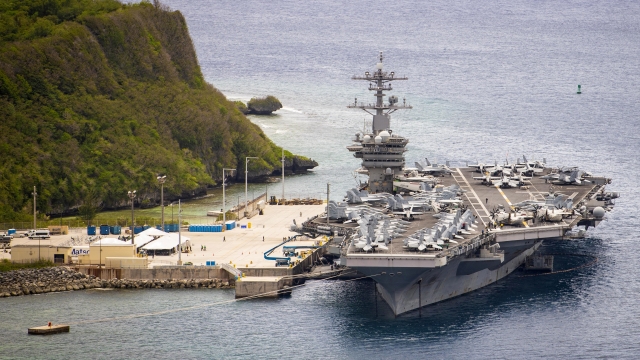 SMS
USS Theodore Roosevelt Expected To Leave Guam This Week
By Katherine Biek
By Katherine Biek
May 19, 2020
The aircraft carrier has been docked in Guam since late March, following a COVID-19 outbreak at sea that infected more than 1,000 crew members.
SHOW TRANSCRIPT

The USS Theodore Roosevelt is expected to return to sea this week, according to multiple reports.

The aircraft carrier has been docked at a port in Guam since late March, following a coronavirus outbreak at sea that ended up infecting more than 1,000 crew members.

The U.S. Navy said Monday that sailors are conducting a pier-side exercise that simulates being at sea.

The so-called "fast cruise" exercise helps measure how prepared a crew is before they're given the go-ahead to deploy.

The exercise comes as at least 14 sailors retested positive for COVID-19, according to the Associated Press. Those sailors and others who came into contact with them have since been removed from the ship.

Capt. Carlos Sardiello told the AP that roughly 1,800 sailors still in quarantine will be left behind in Guam when the ship heads out to sea. That means he'll be running the Roosevelt with a crew of about 3,000, instead of the almost 5,000 it's usually staffed with.