USMCA Support Will Be Key Test For 2020 Democrats 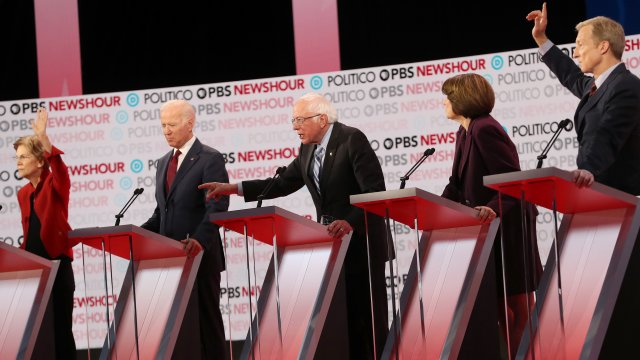 SMS
USMCA Support Will Be Key Test For 2020 Democrats
By Matt Picht
By Matt Picht
December 31, 2019
The USMCA's passage through Congress could end up testing the various trade views of the Democratic presidential candidates in 2020.
SHOW TRANSCRIPT

The 2020 Democratic presidential candidates are facing a trade litmus test with the impending passage of the U.S.-Mexico-Canada trade agreement, or USMCA.

The trade agreement, an updated version of the existing NAFTA deal, drew widespread criticism from Democrats when it was first unveiled.

But after Democrats in the House secured a few tweaks, some 2020 candidates are starting to come out in favor of the agreement.

Democratic frontrunner Joe Biden is backing the trade deal, citing its added labor protections which have earned a rare vote of confidence from some major labor unions. Biden's one of seven Democrats who've expressed support for the new USMCA.

The only Democratic candidate who's still publicly opposed is Sen. Bernie Sanders.

The Vermont senator is a long-time opponent of NAFTA, and argues the new version doesn't do enough to address its predecessor's flaws.

The rest of the field is still publicly on the fence: leading candidates like Sen. Elizabeth Warren and Mayor Pete Buttigieg initially opposed the USMCA, but haven't weighed in on the revised agreement supported by House Democrats.

Warren will likely have to take a public position on USMCA soon enough — as will the other senators running for the White House. The deal still needs to be voted on by the full Senate in order to make it to President Trump's desk.