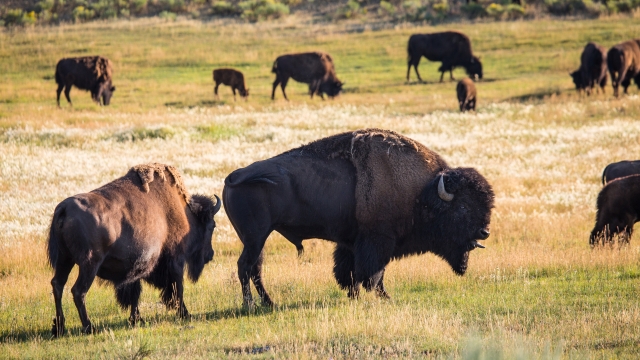 SMS
U.S. Will Not Grant Yellowstone Bison Endangered Species Protections
By Stephanie Sandoval
By Stephanie Sandoval
September 6, 2019
The U.S. Fish and Wildlife Service said petitions to protect the bison "did not present substantial information to indicate listing may be warranted."
SHOW TRANSCRIPT

The U.S. Fish and Wildlife Service will not grant Yellowstone National Park's bison protection under the Endangered Species Act. But it says it will consider protections for the Mojave poppy bee and Mount Graham red squirrel.

The agency said, "The petition for the Yellowstone bison did not present substantial information to indicate listing may be warranted, so no additional action will be taken."

Several groups had petitioned to get Yellowstone's bison on the endangered species list. Darrell Geist, a habitat coordinator for the nonprofit Buffalo Field Campaign, told The Associated Press that the service did not consider the fact that one of the park's two major bison herds is facing a "steep decline."

The Fish and Wildlife Service says Arizona's Mount Graham red squirrel was originally listed as endangered in 1987, and the service agrees that more habitat protection should be considered. Wildlife advocates believe removing structures from the squirrels' habitat is the only way to save the species.

As for the Mojave poppy bee, the service says it's "tightly linked to the survival of two rare desert poppy flowers in the Mojave Desert." It could be threatened by certain human activities and competition with nonnative bees.

The agency will conduct more intensive reviews before making any final decisions.