Report: Death Penalty On The Decline In The U.S. 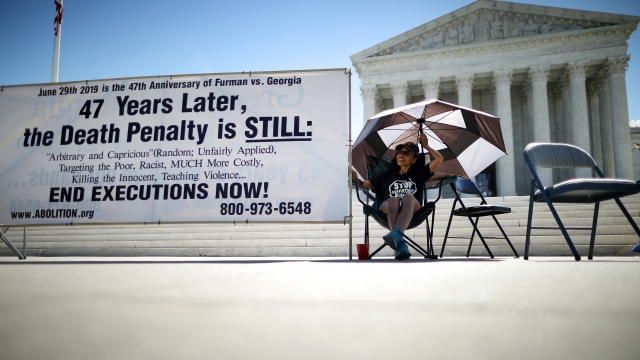 Use of the death penalty in the U.S. continues to decline, according to a report released Tuesday by the nonprofit Death Penalty Information Center, or DPIC. The report notes that in 2019, New Hampshire became the 21st state to abolish the death penalty and California became the fourth with a moratorium on executions.

Robert Dunham, the executive director of the DPIC, said there's been "a wave of death penalty abolition" along the East Coast and that 2019 represented a "microcosm of the climate change in the U.S." toward capital punishment.

He said: "If you started your car in the northeastern tip of Maine and you drove to the southwestern tip of West Virginia, you would go almost 1,300 miles without ever driving through a state that had the death penalty. And so there's this sense that death penalty is eroding — one by one, state by state."

Dunham also said the history of the death penalty in the U.S. is "inextricably intertwined" with its racial history. He said the possibility of innocent people being executed by the state — particularly innocent black people — has changed public perception of capital punishment.

Maurice Chammah is a staff writer for Newsy partner The Marshall Project, a nonprofit news organization covering criminal justice. He's currently writing a book about the history of the death penalty. He told Newsy that the decline in support for capital punishment has been a part of a "larger rethinking of the criminal justice system."

Chammah said: "I also think that the decline of the death penalty has shown that people who commit really terrible crimes, really atrocious crimes — ones that Americans really want to punish — has sort of shown the reasons why they committed those crimes, whether it's mental illness or intellectual disability or addiction. And that has led to a larger sense of mercy around people who are in prison who commit crimes."

Last year, the Trump administration moved to reform the federal justice system by passing the bipartisan First Step Act. Then in November, the Justice Department vowed to pursue reinstatement of the death penalty at the federal level. It's not entirely clear how popular that notion is. Last month, a Gallup poll found that for the first time, the majority of people in the U.S. — 60% — felt life in prison was a better punishment for murder than the death penalty. That said, 56% still broadly supported the use of the death penalty for convicted murderers.