USC President Steps Down Amid Fallout From Campus Doctor Scandal 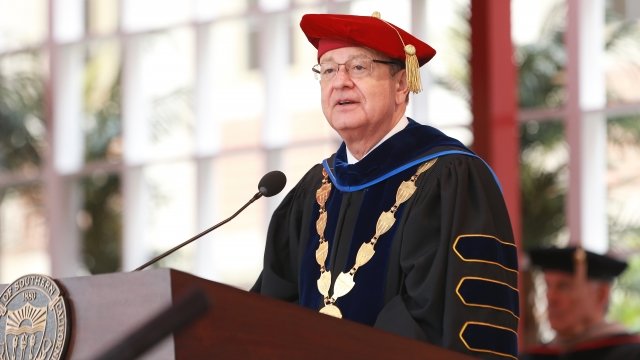 SMS
USC President Steps Down Amid Fallout From Campus Doctor Scandal
By Katherine Biek
By Katherine Biek
August 8, 2018
C.L. Max Nikias agreed to resign as university president back in May after allegations against campus doctor George Tyndall were first made public.
SHOW TRANSCRIPT

The University of Southern California's president stepped down from his post Tuesday.

C.L. Max Nikias agreed to resign as university president back in May following criticism over how the school handled accusations of sexual misconduct against a former campus gynecologist.

Dozens of lawsuits have been filed against USC and Dr. George Tyndall alleging the doctor made lewd comments and touched patients inappropriately during exams.

After the allegations were first reported in May, USC disclosed it began investigating Tyndall in 2016 but didn't report the complaints to California's medical board at the time. USC and Tyndall entered into a separation agreement last year.

The U.S. Department of Education opened a federal investigation into the university in June.

Wanda Austin, a member of USC's board of trustees, is currently serving as interim university president.