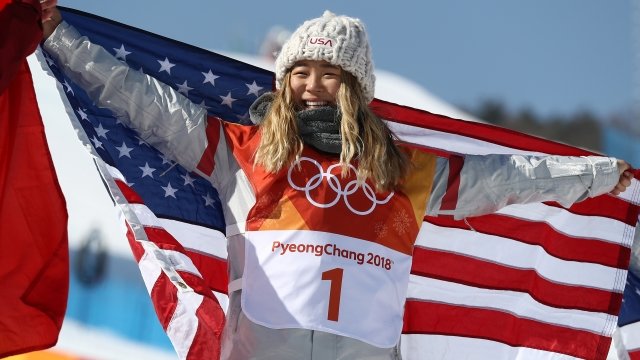 SMS
USA's Chloe Kim Definitely Lived Up To The Hype At The Winter Olympics
By Briana Koeneman
By Briana Koeneman
February 13, 2018
The 17-year-old blew away her competition and won the gold medal in the women's snowboarding halfpipe.
SHOW TRANSCRIPT

Chloe Kim was expected to blow away her competition in the women's snowboarding halfpipe at her very first Winter Olympics.

And she definitely lived up to the hype, snagging the gold medal and landing some awe-inspiring tricks.

The 17-year-old brought down the hammer on her very first run Tuesday, scoring a whopping 93.75 points. For the finals, athletes take three runs down the halfpipe, and the best score wins.

Kim's competitors spent the rest of the event trying to match her score. But by the third and final run, no one came close.

With the gold medal securely in her grasp, Kim could have treated her last run like a victory lap.

Instead, she decided to go out with a bang and pull back-to-back 1080 spins — a feat no other woman has ever landed in an official competition.

Why? She later told reporters, "I knew that if I went home with a gold medal knowing I could do better, I wasn't going to be very satisfied."

Kim's final run earned her a nearly perfect score from the judges. She is now the youngest gold medalist in the halfpipe event.