US Says It Won't Support Kurdistan's Push For Independence 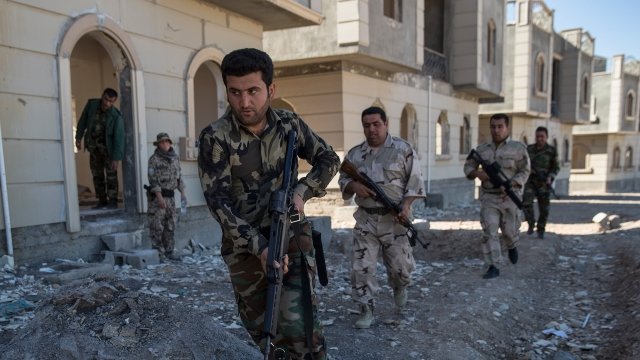 SMS
US Says It Won't Support Kurdistan's Push For Independence
By Grant Suneson
By Grant Suneson
September 16, 2017
The U.S. asked the government of Iraq's Kurdistan region to hold off on its push for independence to instead focus on fighting ISIS.
SHOW TRANSCRIPT

In a surprise move, the Trump administration came out against a U.S. ally's bid for independence.

Kurdistan is an autonomous region in northern Iraq. The Kurds are thought to be the largest ethnic group without their own country — but they want that to change.

Kurdistan's regional parliament voted Friday to hold an independence referendum. It's currently scheduled for Sept. 25 and would likely end up with a vote directing Kurdistan's government to start negotiating its independence with Iraq's central government.

Other countries in the region — like Iran and Turkey — oppose the move. They worry that, if successful, the referendum could embolden their own Kurdish populations to try to break free.

Kurds from all across the Middle East have pushed for autonomy. In 2016, Syrian Kurds announced a plan to carve out their own section of Syria.

The U.S., which doesn't often agree with Iran, also called for Kurdistan to hold off on the referendum. A White House statement said the vote is "distracting from efforts to defeat ISIS and stabilize the liberated areas."

The U.K. echoed the U.S. statement, saying the vote "risks increasing instability in the region" and that the Kurds should focus on fighting terrorism.

Kurdish fighters like the Peshmerga and YPG are an integral part of the fight against ISIS. The U.S. even trained and armed them, so Kurdish officials were surprised and disheartened the U.S. came out against the vote so strongly.

The U.S. government instead wants the Kurds to negotiate with Iraq's government in Baghdad for more autonomy.

Some Kurdish leaders said they may be willing to postpone the vote if U.S. and international leaders promised to support and legitimize a future referendum. Though at the moment, it doesn't seem likely they'll postpone.