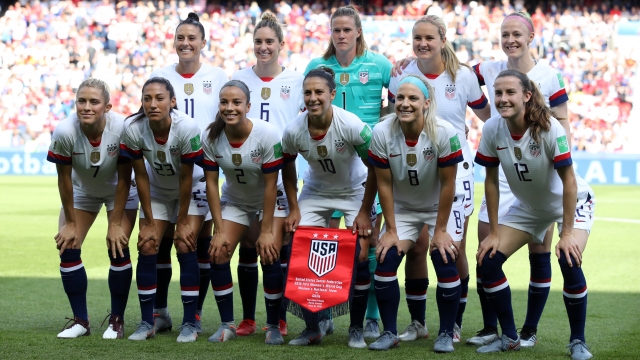 SMS
Women's Soccer Team Says It's Paid Less Than Men Despite More Revenue
By Johannah Grenaway
By Johannah Grenaway
June 18, 2019
Members of the women's national team say they made U.S. Soccer more money than the men's team, but that they're still paid less.
SHOW TRANSCRIPT

The U.S. women's national soccer team has closed a revenue gap, but now players are hoping to close a pay gap as well.

And the 28 women players made that revenue a key part of their argument when they filed a gender discrimination lawsuit in March. Despite the women's team bringing in more revenue than the men's, women players say U.S. Soccer has paid them less than men; denied them the same playing, training and travel conditions as men; and promoted their games less than men's.

U.S. Soccer has denied the pay gap allegation. It said in May that the teams are paid "based on differences in the aggregate revenue generated by the different teams and/or any other factor other than sex."

According to the women's Equal Employment Opportunity Commission complaint, that means a man could lose all his mandatory exhibition games and still make $1,000 more than a woman who wins all 20 games.

The women's team has won four Olympic gold medals and three World Cups — not to mention that it just broke the record for the largest winning margin in World Cup history. The team defeated Thailand 13-0 on June 11.

The U.S. men's soccer team has never won a World Cup and did not qualify for the 2018 tournament.

But U.S. Soccer says the women's and men's teams have "different obligations, are compensated in fundamentally different ways and enjoy different benefits."

A representative for the women's team said the players "look forward to a trial next year after the World Cup."