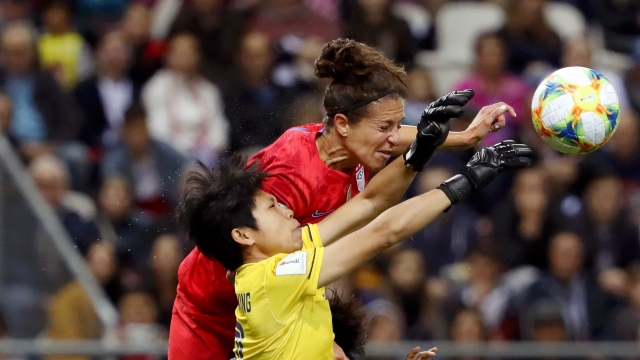 SMS
US Women's Soccer Team Agrees To Mediation In Gender Lawsuit
By Alec Larson
By Alec Larson
June 23, 2019
​28 members of the USWNT filed a suit against the US Soccer Federation in March that alleged "institutionalized gender discrimination" had occurred.
SHOW TRANSCRIPT

Members of the U.S. Women's National Team and the U.S. Soccer Federation have tentatively agreed to mediate a lawsuit that accuses the federation of gender discrimination.

28 members of the USWNT filed a lawsuit against the U.S. Soccer Federation in March. They alleged "institutionalized gender discrimination" in multiple areas, including unequal pay compared to players for the men's national team.

In a statement, U.S. Soccer said, "While we welcome the opportunity to mediate, we are disappointed the plaintiffs' counsel felt it necessary to share this news publicly during the Women's World Cup."

In 2016, five women's team players filed a complaint with the U.S. Equal Employment Opportunity Commission, accusing the federation of gender-based pay discrimination. That complaint has now been replaced by the current lawsuit.