These Women Hockey Players Are Boycotting For Better Pay 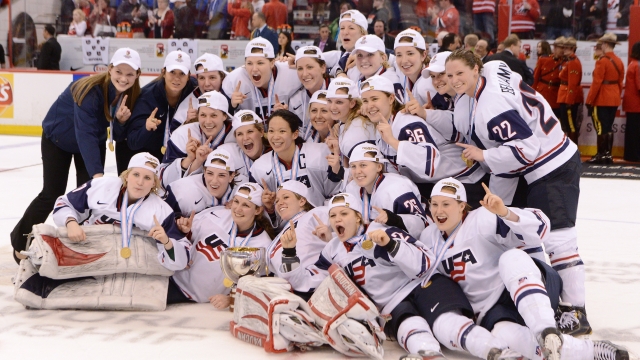 Members of the U.S. women's national hockey team will stay off the world championship ice unless USA Hockey pays up.

The players say they've been negotiating with the national governing body "over fair wages and equitable support" for a year. And apparently, they're not happy with the progress.

According to the players' lawyers, USA Hockey pays "virtually nothing" during the 42-month non-Olympic period. But the athletes are expected to "train full time and compete throughout the year."

USA Hockey has paid the players $1,000 per month during the six-month Olympic residency period, the statement says. Outside the Olympic period, their pay comes from the U.S. Olympic Committee. According to the statement, "Approximately half of the players on the Women's National Team hold second or third jobs, and many others rely on financial support from family members."

In addition to more pay, the players want girls to have equal development opportunities as boys. USA Hockey's development program for boys includes two national teams. But for girls, it only offers national camps.

And apparently, the boys' teams in the National Development program play way more games than the Women's National Team does in non-Olympic years.

USA Hockey said in a statement Wednesday it understands the concerns and has increased its level of direct support.

The statement went on to say USA Hockey's additional support ahead of the 2018 Winter Olympic Games "includes a six-month training camp, additional support stipends and incentives for medals that could result in each player receiving nearly $85,000 in cash over the Olympic training and performance period."

But in an interview with USA Today, one of the lawyers representing the team said the $85,000  figure was "misleading" because it includes the money provided by the U.S. Olympic Committee.

The Women's National Team was supposed to start training next week to compete in the International Ice Hockey Federation World Championship games. The games begin at the end of the month and will be held in Michigan.

According to their statement, we shouldn't expect the reigning world champions to hit the IIHF ice "unless meaningful progress is made" in the negotiations.