US Goes Public With Evidence Iran Is Behind Tanker Attacks 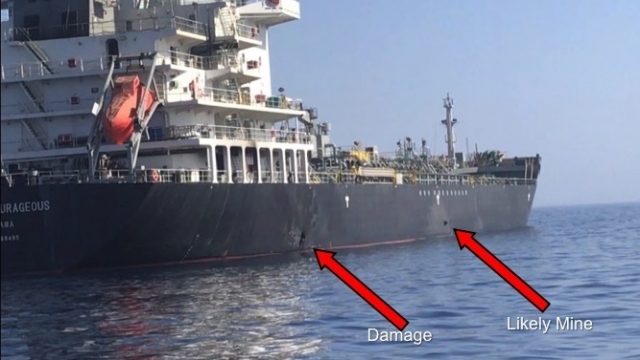 The U.S. has released videos and displayed fragments of limpet mine to bolster its case that Iran is responsible for attacks on two tankers last week.

The U.S. is leaning on public evidence to bolster its accusations that Iran is behind last week's attack on two tanker ships in the Gulf of Oman.

The latest exhibit from the U.S. are scraps of metal shrapnel and a magnet recovered from the hull of the one of the damaged ships. A Navy expert told reporters the mine used in the attack bore "a striking resemblance" to a type of limpet mine made in Iran, though he stopped short of directly attributing the attack to Iran.

The U.S. says the Japanese tanker ship Kokuka Courageous was targeted by two limpet mines, only one of which actually exploded. The U.S. previously released footage of what it says were Iranian forces removing the unexploded mine from the ship's hull. A second ship, the Norwegian-owned Front Altair, was also struck in the attacks — no lives were lost in either incident. Iran has denied all involvement in both cases.

The U.S. was quick to attribute the explosions to Iran, but prominent European allies initially reserved judgment in the immediate aftermath. Publicizing the U.S. evidence of Iran's involvement might have tamped down some of that skepticism: German Chancellor Angela Merkel said there was "strong evidence" of Iran's responsibility in the attacks, days after her foreign minister said he wasn't ready to make a final assessment about the attacks.

The U.S. has responded to the bombings by moving 1,000 troops into the region, while Iran has threatened to abandon the international deal constraining its nuclear program.