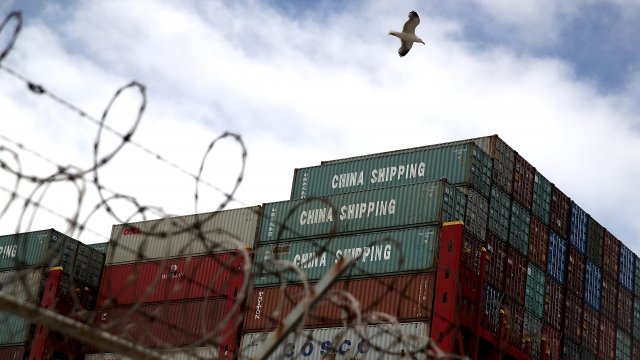 The Commerce Department said Thursday the U.S.' trade gap grew by nearly $1 billion between September and October. Economists point to a few factors behind a surge in U.S. imports and a decline in exports.

For one, some American companies have been stocking up on Chinese goods before a tariff hike that was supposed to kick in early next year. Americans are also spending more on foreign goods thanks to a strong economy. But a strong economy can be a double-edged sword because it also raises the dollar's value, making American products more expensive in foreign markets.

But the biggest reason for the gap is probably the U.S.' trade war with China. The Trump administration hit China with tariffs on $250 billion worth of its imports, and China retaliated with its own tariffs on U.S. imports.

The U.S.' soybean exports were hit particularly hard. Until recently, China had taken in more than half of annual U.S. soybean exports. But The New York Times reports tariffs on U.S. soybeans have driven down sales to China by 94 percent since the same time last year.

With all of that being said, President Donald Trump and Chinese President Xi Jinping did agree Saturday to hold off on imposing more tariffs for 90 days will they try to negotiate a deal.