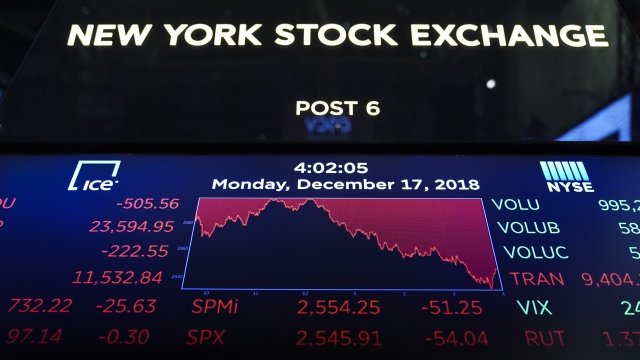 By Cristina Mutchler
December 17, 2018
The Dow fell 508 points and the S&P 500 dropped to its lowest level in more than a year.
SHOW TRANSCRIPT

U.S. stocks showed no signs of improvement after a rough day Monday.

Investors appear to have multiple concerns about the economy right now.

For starters, two weak economic reports were released Monday on declines in New York-area manufacturing and a drop in confidence among American homebuilders.

Low oil prices, trade tensions with China and the possibility of a government shutdown have also contributed to recent market volatility.

Adding fuel to the fire, the Federal Reserve will hold its December meeting this week, and it's expected to raise interest rates for the fourth time this year.

There's a fine line between hiking rates steadily to keep the economy balanced and raising rates too quickly, which experts say could lead to a recession.

While no one can predict exactly when a recession will happen, analysts suggest it might be likely to happen within the next two years.