US, South Korea Could Announce Pause Of 'Large-Scale' Joint Exercises 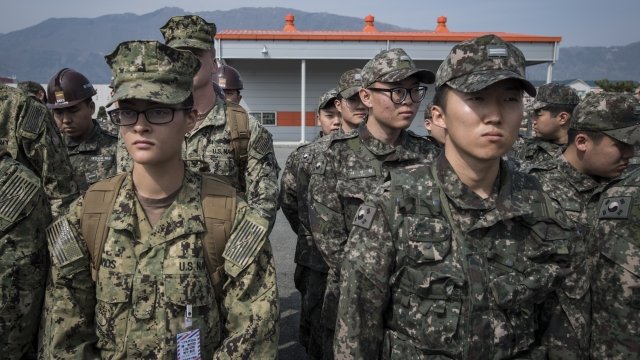 South Korea and the U.S. are expected to announce a suspension of "large-scale" joint military exercises this week. That's according to South Korean news agency Yonhap.

This potential announcement comes after the U.S.-North Korea summit on June 12. There, North Korean leader Kim Jong-un recommitted to "complete denuclearization" in exchange for some "security guarantees" from President Donald Trump. The president also said he would put a stop to some U.S.-South Korean military exercises, calling them "war games."

A government source told Yonhap that there will most likely be a clause in the announcement that says the drills could resume if North Korea doesn't follow through on its denuclearization promise.

At a Senate hearing on Thursday, the Trump administration's nominee for ambassador to South Korea, retired Adm. Harry Harris, supported President Trump's idea of suspending the drills. He said he thought the suspension would only affect major exercises but that regular training of U.S. troops in South Korea would continue.

There's no word on how the announcement would affect the next major joint exercise — called Ulchi Freedom Guardian — which was originally expected to take place later this year.