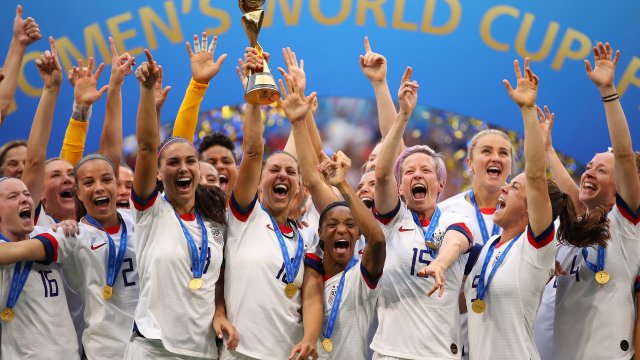 The president of the U.S. Soccer Federation says members of the women's national team have made more money than the men's team.

In an open letter released Monday, Carlos Cordeiro said the USSF paid women's players $34.1 million in salaries and game bonuses from 2010 through 2018. The letter is in response to criticism that the men's team is paid more than the women's. This, despite the women winning back-to-back World Cup titles, and the men's team failing to qualify for the most recent World Cup.

The men's players, on the other hand, were paid $26.4 million. Cordeiro wrote that number doesn't include the value of benefits only given to the women's team, like health care.

But the comparison isn't actually that simple. The women's and men's teams have separate collective bargaining agreements that outline different pay structures. For instance, the women's players are given a base salary. The pay for the men's team members mostly comes from matches and performance.

And according to documents obtained by the Guardian late last month, the women's team earned up to about $261,000 in bonuses for winning the World Cup. But if they were entitled to the same bonuses as the men's team, they could've made about five times that amount. We should note that some of these bonuses are for each win, so there's a chance the players wouldn't get all of the possible bonus money.

The USSF is currently facing a gender discrimination lawsuit from the women's team. All 28 members of the team signed on to the suit, which was filed back in March. It accuses the U.S. Soccer Federation of paying the women less than the players on the men's soccer team.

On Monday, a spokesperson for the players in the lawsuit slammed Cordeiro's letter as a "ruse" and a "sad attempt by the USSF to quell the overwhelming tide of support the USWNT has received."