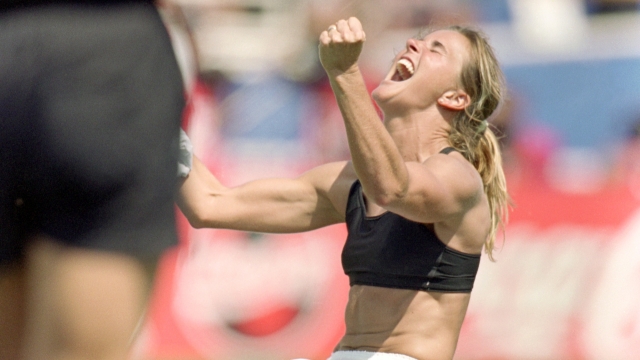 Brandi Chastain told The New York Times "It feels like my responsibility" when asked about donating her brain to CTE research.

She's one of U.S. women's soccer's most recognizable faces.

The two-time Women's World Cup and two-time Olympic gold medal winner made the announcement public in an interview with The New York Times published Thursday.

Chastain said, "If there's any information to be gleaned off the study of someone like myself, who has played soccer for 40 years, it feels like my responsibility — but not in a burdensome way."

The 47-year-old has been an advocate for soccer safety since hanging up the cleats in 2010.

"I felt that if I prepared and I headed the ball properly that I was safe. Now I know a little better," Chastain told PBS.

While the NFL has received most of the attention for CTE, long-lasting effects from head trauma have been seen in many other major American sports, too ...

... except women's sports. A 2013 report called the study of CTE in females "virtually nonexistent."

Chastain became an American icon after sinking the winning penalty kick for Team USA against China in the 1999 World Cup.

In the New York Times interview, Chastain said she shook off potential concussions half a dozen times or so, but she tries not to get hung up on the potential ramifications.

This video includes clips from HBO, CBS and Sony Pictures Entertainment, and images from Getty Images.