US Says It'll Keep Working With Saudi-Led Coalition In Yemen 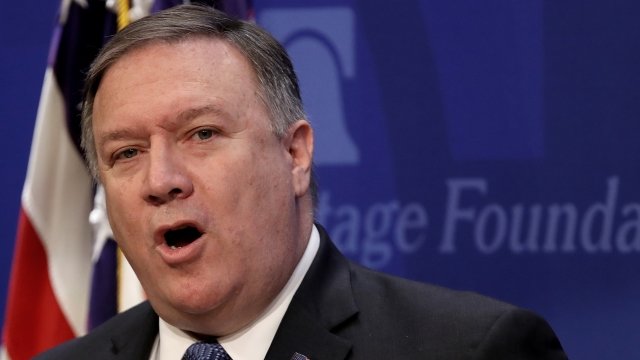 By Katie Cammarata
September 13, 2018
The decision meets a deadline set by bipartisan members of Congress to figure out the U.S.' role in Yemen's civil war.
SHOW TRANSCRIPT

The Trump administration says a Saudi-led coalition in Yemen is doing what it can to prevent civilians from getting hurt in the country's civil war.

Secretary of State Mike Pompeo certified to Congress that the coalition is "undertaking demonstrable actions to reduce the risk of harm to civilians and civilian infrastructure."

His certification meets a deadline set by bipartisan members of Congress to figure out the U.S.' role in Yemen's civil war. Pompeo said the U.S. will continue working with Saudi Arabia and the United Arab Emirates.

Last week, the coalition acknowledged that it made mistakes in airstrikes on a school bus in northern Yemen in August that left 51 people dead. Most of the victims were children.

The Saudi-led coalition expressed "regret over the mistakes" and pledged to hold those responsible accountable.

The coalition has been fighting Houthi rebels in Yemen since 2015. Thousands of people have died in the conflict.

A U.N. report released last week said all sides in the Yemen conflict have committed possible war crimes. The allegations include rape, torture, indiscriminate killing of civilians and recruitment of child soldiers. The U.N. says the situation in Yemen is the world's worst humanitarian crisis.